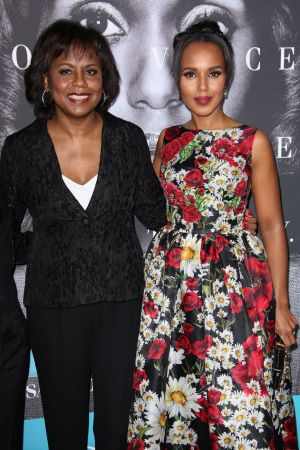 “Neither one of us desired to live a life in the public eye,” Kerry Washington said of similarities between her and Anita Hill, who she portrays in HBO’s new movie “Confirmation.” The activist actress and the law professor hit the Paramount Studios lot in Hollywood on Thursday night for the drama’s premiere. “Privacy is really important to both of us,” Washington continued, “but because of the circumstances of our lives, our private lives have become public and that’s not something that I relish. It’s definitely not something that she does.” Indeed, Hill skipped the red-carpet interviews.

Washington stars in the Rick Famuyiwa-directed drama (his follow-up to the 2015 indie “Dope”), which focuses on Hill’s sexual harassment accusations against then-Supreme Court nominee Clarence Thomas in 1991. The news story put Hill in the eye of a storm while her character was questioned and attacked.

“The film is a lot about courage and being up against forces that feel more powerful than you,” said Washington, who also executive-produced the project. “It was one of the things that drew me to the project because on ‘Scandal’ I play somebody who is always the most powerful person in the room. I thought, ‘What about playing someone who is on the other side of the spectrum when it comes to D.C. politics?’”

“Confirmation” airs on April 16 and stars Wendell Pierce as Thomas, Greg Kinnear as [then-Sen.] Joe Biden, Eric Stonestreet, Zoe Lister-Jones, Jeffrey Wright, Erika Christensen, and Alison Wright, all of whom were on hand for the premiere. Jennifer Hudson and Grace Gummer also appear in the film, though they didn’t attend. Washington’s “Scandal” costars came out in full force, as did Sen. Barbara Boxer, Zendaya, Regina King, Rose McGowan and Gabrielle Union.

While Washington said she strove to create a film that “was balanced and fair,” some politicians have expressed concern that it’s biased toward Democrats (to be fair, this is Hollywood). However, Lister-Jones, who plays Carolyn Hart (an aide to Sen. Joe Biden), dismissed such discussion. “I don’t think that there’s a lot of merit to that controversy,” she said. “I think that the film is actually incredibly fair. HBO did a great job in walking a very fine line.”

The actress — who was nine years old when the story first played out on national television — found parallels between the film and the current presidential election. “This moment in history was really the beginning of the 24-hour news cycle and Anita’s testimony became so salacious and really rocked the journalistic world because suddenly there was a nonstop newsfeed. That’s also lent to giving a voice to a lot of these candidates all the time. [The election has] become such a circus.”

Following the screening, guests walked around the corner to a soundstage transformed for the after party, complete with a buffet and passed hors d’oeuvres. “I wanted to wear something special for Kerry’s big moment,” said Union of her Marc Jacobs dress. “Her as an executive producer is such a boss move. I’m here to learn from her. Hopefully, she’ll take me under her wing.”