The two charities, which are in the final stages of a merger, held a combined fund-raiser at New York's Chelsea Piers. 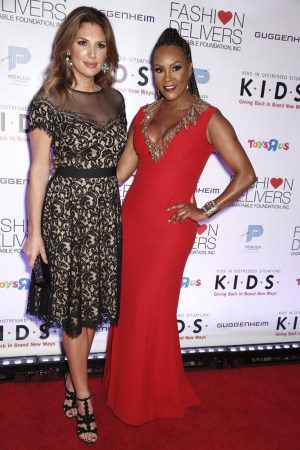 Kids in Distressed Situations and Fashion Delivers changed things up this year.

The two charities, which are in the final stages of a merger, held a combined fund-raiser at Chelsea Piers on Wednesday night, eschewing a traditional Midtown hotel for a locale with stunning views of the Hudson River. The format of the event also changed. The cocktail “hour” was supersized, lasting around double that time to give the 800 attendees a chance to mix and mingle. And instead of the standard sit-down dinner, there was a bevy of hot hors d’oeuvres and several eclectic buffet stations.

Although the format may have been different, the event still served to honor several fashion industry leaders. This year’s honorees were Brendan Hoffman, chief executive officer of The Bon-Ton Stores Inc.;  Robert Campbell, ceo of children’s footwear manufacturer BBC International; Peter Comisar, vice chairman of investment banking for Guggenheim Partners, and TV personality Daisy Fuentes, who has a women’s fashion line at Kohl’s.

In their acceptance speeches, the honorees acknowledged the work of the two charities, which have coordinated the donation of over $1 billion in product to individuals and families in need.

Hoffman called that figure “staggering,” and pointed to the “comfort” the two groups bring to those they serve. Comisar, who said that as a banker he was more of a “voyeur” of the fashion industry, said the results of the groups’ work was “tangible.” Campbell told a tale of how he grew up impoverished as the son of a single mom. But while she may have struggled to make ends meet, she taught her son to always give back. As a result, he pledged to donate thousands of pairs of shoes to K.I.D.S. and Fashion Delivers.

Fuentes, too, pointed to her brand’s promise to donate $200,000 worth of her apparel to the charities. She said that being in fashion or entertainment is often “superficial.”

But it has also “given me a voice. We all want to give back, but it’s difficult to decide where to put our trust.” Now that she has put her trust into these two groups, she has learned first-hand what a statement they make.

The evening raised $1.4 million for the two groups.