The charities expect to formally combine within the next several months. 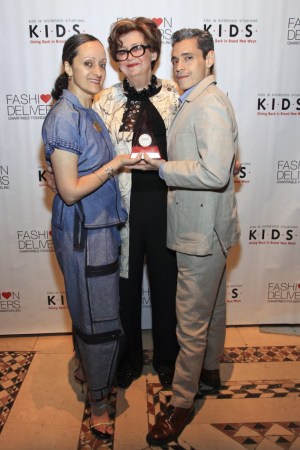 The missions of Kids in Distressed Situations and Fashion Delivers are similar: Both charities work to provide product to children and families in need. So it’s no surprise the two organizations are planning a merger.

At a dual Women of Achievement luncheon at Cipriani last Thursday, Allan Ellinger, chairman of Fashion Delivers, flanked by Kevin Burke, chairman of K.I.D.S., told the group that the charities expect to formally combine within the next several months. Ellinger told WWD later that although both boards have voted unanimously for a merger, the final approval must come from the Attorney General of New York State. “Everything indicates that we’ll get it done,” he said.

On Thursday, the spotlight was on four women who have made a difference through their professional and philanthropic endeavors. The luncheon honored Margaret Hayes, chief executive officer of Fashion Group International; Joanne Podell, vice chairman of retail services for Cushman & Wakefield; Maura Regan, senior vice president and general manager of global consumer products for Sesame Workshop, and Kelly Neal Mariotti, ceo of First Candle.

Surrounded by their families and friends, the four took the time to highlight the work of the two organizations and urge attendees to continue to support their efforts. Regan said there are “too many children going without the basics they need to succeed.” Podell said that by providing needy families with new apparel and other products, “we’re telling young children and their families that they matter.” Hayes, whose award was presented by designers Isabel and Ruben Toledo, said the charities “bring a rebirth of confidence and self-esteem” to those they help. Mariotti, who left a career as a corporate lawyer to helm a national nonprofit organization dedicated to safe pregnancies and the survival of babies through the first years of life, urged attendees to volunteer their time as well as their financial support to help others and leave behind a legacy of which they can be proud.

The luncheon, which raised $200,000 for the charities, also served to introduce the new president of K.I.D.S., Denise Williams.