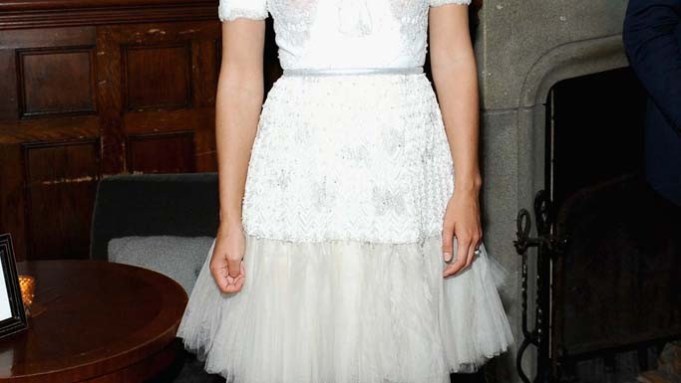 Keira Knightley made a pretty picture in an off-white Chanel Haute Couture frock at the Canadian premiere of “The Imitation Game” during the Toronto International Film Festival Tuesday night.

But after the screening, all eyes remained on the star of the film, Benedict Cumberbatch, who proved to be ill-prepared for all of the female attention. “Would I be able to feast on your yumminess?” asked a brave brunette during the panel discussion. “I think we’re going to move on,” said festival director Cameron Bailey, who moderated the 20-minute chat at the Princess of Wales Theatre. “Sorry, I’m already taken,” a blushing Cumberbatch cracked, killing the fantasy for many in the crowd. Minutes later, he asked an audience member to repeat her question, explaining that he still hadn’t recovered from the shock of the first one.

After the panel, Cumberbatch hopped on a plane to film “Richard III,” while Knightley and husband James Righton partied at The  Soho House alongside Harvey Weinstein, who snatched up the U.S. rights to the film in February for $7 million. Knightley sipped on an Aperol spritz, while guests raided The Weinstein Co.-funded buffet, which brimmed with leg of lamb, roast salmon, red snapper and rib eye beef.

“What do you want to know? I’m wearing Marchesa,” said a jovial Weinstein, pleased with the film’s “rapturous” reception. “I’ve been lucky enough to work with Daniel Day-Lewis three times in my life. Benedict has that same level of dedication and he’s sweet as can be. He’s so gallant,” Weinstein gushed, before adding, “I think Keira gives her best performance.”