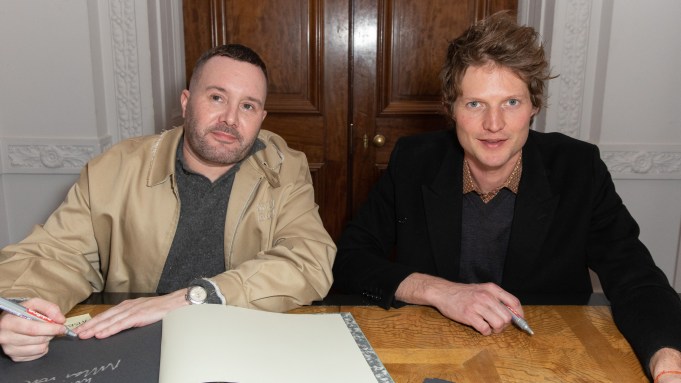 ROMAN AROUND: Three years, and one pandemic ago, Kim Jones teamed with Nikolai von Bismarck on “The Dior Sessions,” a book charting Jones’ first year at Dior Men through 100 black-and-white portraits of the designer’s friends and colleagues.

This week, the two creatives returned for an encore with the launch of “The Fendi Set,” a book of portraits showcasing Jones’ first couture collection for the brand, which focused on Virginia Woolf, her sister Vanessa Bell and the Bloomsbury Set bohemians.

The book, published by Rizzoli, features photography by von Bismarck, and text by Jones, Jerry Stafford and Dr. Mark Hussey.

It was shot at different times of the year in Sussex and Kent, England, in Paris and in Rome, where von Bismarck photographed three generations of Fendi women — Anna, Silvia and Delfina. The three Roman Fendis were styled by Amanda Harlech in Jones’ fall 2021 ready-to-wear collection at Villa Medici.

“It was the first time I did a collection for Fendi, and I wanted to document it, so I thought ‘Why not?'” said Jones, who cooked up the idea while on holiday in Scotland with von Bismarck. “I love Rome, although when I’m there I’m usually just working. And most of the time it’s been in lockdown — but, still, it’s great, and I love walking around and seeing all the history.”

Von Bismarck made it his mission to unearth the Bloomsbury Set’s connections to Rome — of which there are many. Those bohemians certainly knew how to live.

He shot in Polaroid film, and used “different printing processes — things that won’t exist in 10 years’ time. I thought it would be amazing to make something permanent out of all these different, traditional techniques.”

Another British designer called Jones swept into the party early in the evening wearing a Dior jewel on the lapel of his black jacket — a lovely spray of flowers, dotted with pearls.

Milliner Stephen Jones said he’ll be traveling to the U.S. to give a speech on Sunday at the Brooklyn Museum. “It’s about my vision at Dior, over the years” and part of a series of events linked to the exhibition “Christian Dior: Designer of Dreams,” which runs until Feb. 20.