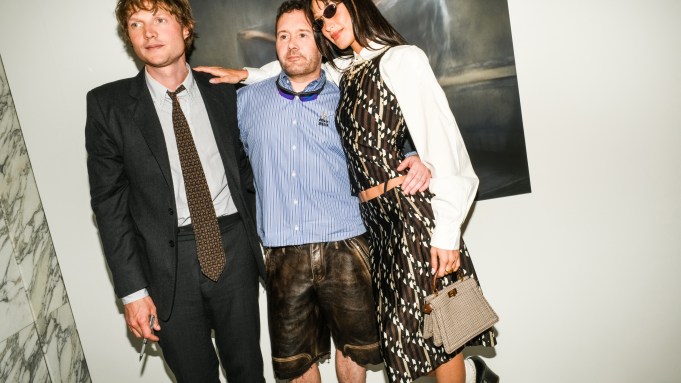 Kim Jones and Nikolai von Bismarck were on hand Tuesday evening at the Madison Avenue Fendi boutique, signing copies of their new Rizzoli book “The Fendi Set: From Bloomsbury to Borghese.” The intimate evening was attended by VIP friends of the pair, including Bella Hadid, Tommy Dorfman, Precious Lee and Selah Marley, who mingled with the designer and photographer amidst the large scale prints of the book’s images on display throughout the boutique.

“The Fendi Set” is the second book from the duo, who previously published “The Dior Sessions” in 2019. The collaborators met in 2016 in Africa and bonded over a campfire one night, becoming fast friends. Jones said he called upon von Bismarck at the start of his appointment at Fendi to begin documenting the experience, and both noted how different the two books are.

“The Dior book was very structured, in black and white — I wanted to keep it simple,” von Bismarck said. “I got advice from a war photographer Don McCullin, and I used to do a lot of travel and reportage photography and he looked and he said ‘it’s wonderful but it’s all over the place. You need discipline and you need patience. You should do a black and white portraiture book.’ So I did that, and then when Kim asked me to do this Bloomsbury book I really researched it and I looked at the process from the different times and I wanted to do all of that. [Both books] hold that classicism, maybe too much, and there is still a darkness to them that runs through.”

Jones, who wore a pair of yet-to-be-released Miu Miu leather shorts (and was asked to pose for photos specifically because of the shorts), said it was strange for him to be reflecting over the images of the past few years, as he’s conditioned as a forward thinker.

“It feels really old to me, because I did it nearly two years ago. I don’t like looking backwards. I find these things quite difficult,” he said. “I’m thinking about what’s next, not what’s done two years ago. That’s why I like fashion. You don’t look back. There’s no point in looking back. You’ve done it. I like looking forward — I think that’s why I’m good for this.”