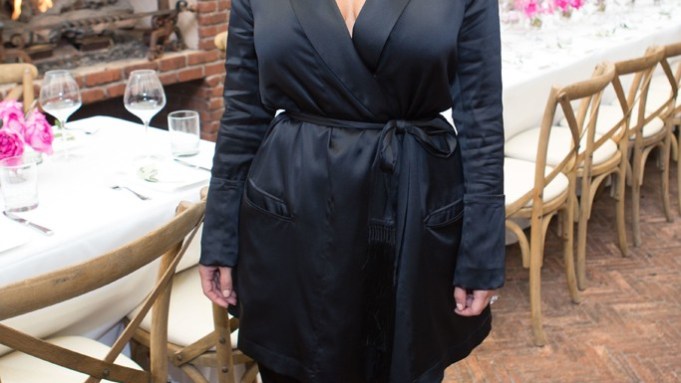 W’s second annual It Girl luncheon at A.O.C. on Saturday proved to be a cozy respite from the rainy day (which carried into Globes Sunday). The invitees ranged from the established ranks of “It”-dom, like Allison Williams, Brit Marling and Michelle Monaghan, to nascent teen up-and-comers like Kiernan Shipka, Isabelle Fuhrman, Kerris Dorsey and Gigi Hadid. The small restaurant felt warm and intimate with the glow of a fireplace and the convivial vibe. When former W cover girl Kim Kardashian breezed in, low-key in a charcoal gray silk Ann Demeulemeester jacket and pants (“I love, love, love her; I have so many pieces. When I was pregnant, I would wear some drapier dresses under coats,” she said), guests barely noticed (the same could not be said for the paparazzi gathered outside). “I’m just going to this event and that’s about it. I was in New York yesterday and I go back tonight.” Why the short trip? “I had a birthday party to take my daughter to before this, and I had a little bit of work for E!” she said. While she said North loves going to parties, “I get a little bit of anxiety. It’s just so much going on, so many kids. I brought my husband and we walk in and it’s like only the moms. I was like, ‘Sorry!’ because he cleared his whole schedule to make family time and he walked in and was like, ‘Thanks, babe.’ All the moms were like, ‘How’d you get him to come here?’ I didn’t know some parties were moms-only. I’m still learning.” Kardashian said she loves the bicoastal life, but not the cold weather. “I’ve never experienced New York that cold. We got off the plane and we were like, ‘Oh. My. God. What is going on?’ But I will say in L.A. a week ago, every morning we’d wake up and our room [window] had ice on it, and our whole fountain was frozen into icicles coming down. Khloé, same thing. She took a photo of her fountain.”

While most people don’t have to contend with frozen fountains during a cold spell, at least Kardashian was sweet about chatting it up with anyone who approached. So was fellow reality star Gigi Hadid. “It’s flattering to be invited to stuff like this,” said the model. She was catching up with Nicola Peltz, whom she said she “clicked right away with” after meeting at a party in New York last year. Unlike many of the Globes-bound actresses, Hadid will sit out the awards show because today is boyfriend Cody Simpson’s birthday and the two plan to spend it at home. “It’s important to make time otherwise we’d never see each other,” she said. “We both work in entertainment and jobs can be so last-minute. I’m like, ‘What are you doing tomorrow?’ He’s like, ‘I’m going here,’ and I’m like, ‘Ok, flying there.’ We keep crossing paths on planes.”