Unity, diversity, climate change, health care, sustainability — there was no shortage of talking points during the slow-moving event. 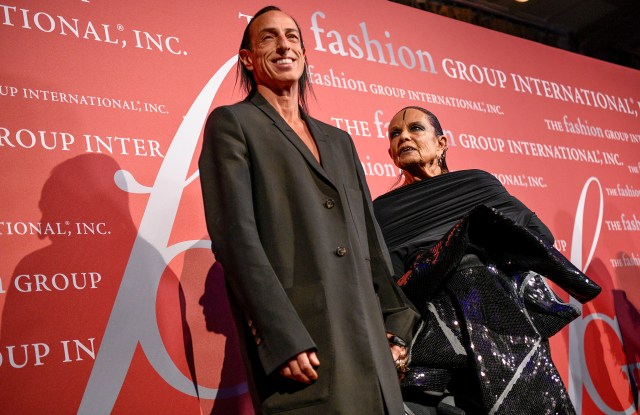 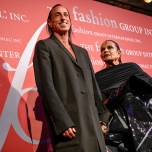 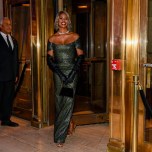 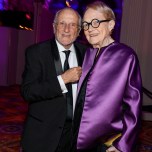 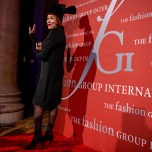 NEW YORK — “It’s the longest night in fashion. It really is. That’s what everyone says. I was warned.”

So said Ruben Toledo good-naturedly at the Fashion Group International’s Night of Stars Thursday at Cipriani’s Wall Street — and that was before the nine awards were doled out. Like scores of other attendees, Toledo, who illustrated the event’s programs, wouldn’t have missed the chance to present a united front. To bide the time, some smartphone-armed guests orbited presenters like Kim Kardashian West, Kanye West, Laverne Cox and Christy Turlington Burns. Vera Wang and Owens’ wife Michèle Lamy were other magnets of attraction. Others snuck back to the since-vacated step-and-repeat for their own selfies.

True to the chaotic times, a simple few words of thanks would have been insufficient for some winners, and presenters, too. As a result, the crowd got an earful about gender, the climate crisis, wage equity, health care, inclusivity, diversity, sustainability, philanthropy, mentoring and unbridled creativity, among other talking points. It was a lot to process. There were also numerous salutes to FGI’s longtime president and chief executive officer Margaret Hayes, who died last February. Another ardent FGI supporter, Toledo’s late wife, Isabel, was also remembered fondly by a few speakers. FGI’s new leader Maryanne Grisz revealed two commemorative scholarships have been set up for Hayes and Isabel Toledo.

More often than not, there was a message to be heard — and at times multiple ones. Some were more candid than others. Taking the lead in hailing Owens, West said, “Talk about reverence. When I called Rick to talk about this evening, half of the conversation was me apologizing for knocking off his color palette,” to much laughter.

Recalling times that he went to the Paris fashion shows, West said, “We would sit there…a few of us, who get to work with the different fashion houses. People would get into conversations about America, and if Americans really do fashion. Rick is like the Michael Jordan of what we do. We fought a lot and worked super super hard. I mean, we have Ralph Rucci and people, who do couture, here. We have Donna Karan. So many people fought, in the same way that Virgil [Abloh] proved that we are not a ‘South Park’ joke. Rick proves for America that we can make real fashion, and not sell a piece of it. No one can deny it. This may be controversial but this is what I do — controversial.”

West was emphatic about how Owens drapes “for hours on end,” lives in the factory, and talks about Brutalism. The Grammy winner lauded the designer for being inspired by Lamy — very much like West’s wife is his own inspiration. “What I love about tonight that is so amazing is the combination of parties. This is a major, major conversation tonight, which is so beautiful,” West continued. “And let’s talk about the streets. When people like A$AP Rocky rap, he says, ‘Raf Simons, Rick Owens, usually what I’m dressed in.’ To go from rap and fashion to the streets, nobody — nobody but Rick — from America, bro.”

Earlier in the night, Kardashian West admitted how Owens was always her fashion currency. “When I knew absolutely nothing, or I didn’t know who anybody was, Kanye was introducing me to so much in fashion. One of the first things he ever got me as a gift was a Rick Owens coat. I was obsessed with these Rick jackets before I knew what was cool,” she said.

West added, “The living, breathing king — draping for hours and hours — changing, not caring, completely shattering every fashion show concept, every proportion, washing the leather. We love that. We go to that Brutalist store — how did he get this fabric to do this? This ain’t no mood board, bro. No, what are we doing this season? What’s hot? What are the buyers going to buy? Rick is like, ‘This is what I’m gonna make.’ This is what it means to dream to be an eternal 3-year-old — to be inspired against everything. Thank you for existing, Rick.“

Earlier in the night, Owens sounded like one seriously content creative. Truth be told, there isn’t anything that he wished he had more time to pursue. Owens said, “I pretty much get to do anything I want and I’m not very greedy. I’m very grateful for all of the opportunities that I’ve had, so I’m never thinking ahead of stuff that I want. I’m thinking about protecting and honoring the stuff that I’ve got.”

At the podium, Owens described the Wests as “two of the most powerful communicators on the planet.” The designer said, “Fashion is about communication. Yes, that can be read at face value, but it can also present a more nuanced set of values that you can project and aspire to, and signal standards and morals we want to align ourselves with. How we dress can be one of the first steps to becoming the people that we hope to be.”

Accepting his award from his fellow “Project Runway” star Nina Garcia, Maxwell spoke of self-improvement for a greater good. “We cannot forget in the hustle and bustle of building our careers, our bank accounts and attending events and parties that someone just like us is waiting outside the door. Because I know that you all are kind people, I urge you to put your money, time and access to good use,” Maxwell said. “I believe that a life well-lived is not always about accomplishments or money, but to know that when it is all said and done that you used your resources to improve someone’s life. I have many more things to say, but I’m definitely over my two-minute limit. So thank you for coming to my TED talk today.”

Before presenting the Sustainability award to International Flavors & Fragrances, “Cradle to Cradle: Remaking the Way We Make Things” author William McDonough encouraged guests to move from “a world of timeful mindlessness to a world of timeless mindfulness.” (Try repeating that one three times fast.) The architect and designer said emphatically, “Let us think deeply and care about the things we make and the things we do.”

Iman’s presenter Cox, an actress and LGBTQ+ advocate, recalled how the model once defined success as “what you aspire others to do.” Cox said, “When I dreamed of becoming a woman of elegance, refinement, taste, intelligence, integrity, seductiveness, warmth and wit, I dreamed about Iman. You are the woman of so many of our dreams.”

Iman wasn’t completely at ease with the star status. During the cocktails, she said, “The idea of being honored with Rick Owens’ name next to yours — you feel like, ‘Really?’ Ralph Rucci? ‘Really?’ So I am really honored.”

A forerunner in bringing multiethnic tones to the beauty industry more than 25 years ago, Iman spoke of the fight for diversity in fashion. About eight years ago she, Bethann Hardison and Naomi Campbell took designers to task for not having more diversified runways. “Since then, after we talked to the CFDA and designers in Europe, the change is palpable. You can see it on the runways, in advertisements and editorials. But diversity doesn’t mean having a black person in your ad or in your collection. It means more than that. That’s why you see designers making missteps — whether it ‘s Gucci, Burberry or whoever [referring to racially charged products that both brands were criticized for producing]. True diversity is more than allowing people at your table. There is work to be done, but it is a work in progress,” she said.

After an introduction by The Metropolitan Museum of Art’s former leader at its Costume Institute Harold Koda, Rucci said his award was validation of a 40-year career. Creating 77 collections required a lot of legwork. Rucci said, “The research is so important and I can’t live amongst other human beings as a normal human being. I have to study and keep myself in a capsule, almost creating a sense of deprivation so I could find what I was looking for. In doing so, you get peculiar. I’ve done it my way. I’ve been pummeled. But I started this profession and my research, by honoring the couture — what it means, how we make clothes a certain way. I don’t have any sense of snobbism. I just wanted to do it the best way that I can and I wanted to do it myself with my own hands.”

Before handing over the Humanitarian award to Karan, Turlington Burns ran through some of the designer’s career highlights — designing for Anne Klein, creating her own brand, designing the revolutionary “Seven Easy Pieces,” envisioning the first female president in a 1992 brand campaign, developing Urban Zen, and supporting charitable efforts like 7th on Sale and Super Saturday.

Karan capped off the night with a freewheeling speech that mentioned how she tried unsuccessfully to hire Owens, and once suggested she and Calvin Klein create one company so that they could each work one season on, one season off. After a riff about health care, she beat the drum about buy-now, wear-now: “We are in a climate situation. We are in a fashion situation. We must start to show to consumers in season. This is a time when designers must come together — in the world. This is not about the United States anymore. It’s not New York designers versus French, Italian or Asian designers. We are one planet. This planet is in trouble and this planet needs our help. I call out to all creative people — artisans, designers, filmmakers — the people who have a voice to talk to the consumer. What do we need?”