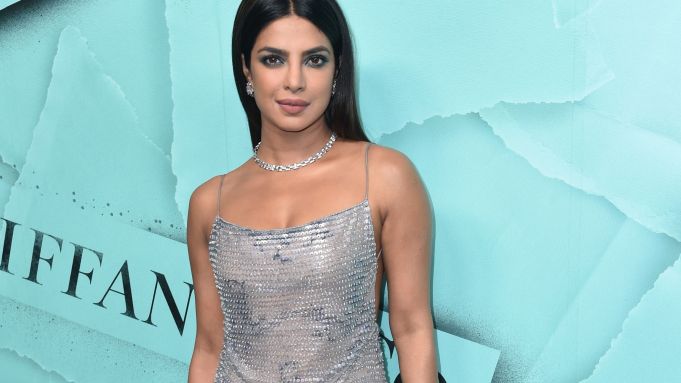 Under normal circumstances, West 24th Street at 11th Avenue in New York is a quiet, dark block at night. But on Tuesday evening, Tiffany & Co. lit it up by installing a red carpet outside of Studio 525, where the company held a party celebrating its new Tiffany Blue Book Collection called The Four Seasons of Tiffany.

Kim Kardashian, Rachel Brosnahan, Mary J. Blige, Priyanka Chopra and Zoë Kravitz were just some of the celebrities who showed up to support the jewelry brand.

When Kardashian stepped into the place, a crush of paparazzi surrounded the perimeter of the carpet, which was illuminated by blinding spotlights. She did some on-camera interviews, and hugged reporters she knew personally.

“Am I, like, so sweaty?” she asked. Her mother Kris Jenner was also in attendance with her boyfriend Corey Gamble. They arrived about 15 minutes before Kardashian did, and went into the party. When she was finished with press, she walked to the entrance, then inquired about her mom.

“She’s already inside? Of course, she is,” she said.

Kravitz stayed mum on her upcoming work, despite recent hinting from her “Big Little Lies” director, Jean-Marc Vallée, that she’d approached him with a script for a film she’d like to direct. Could she say anything more about that?

Is it in the works?

“I’ve written the script, and now we need to get financing and all that,” she said.

Brosnahan was sweet, super polite and game for questions — although she smiled widely, her hands clasped together, and said “I don’t talk about my personal life,” when asked about it. But when it came to her work, she provided depth and insight into the differences between making films and making a show.

“Working on television, especially, we essentially shoot a mini movie every 10 days,” she said. “Our scripts are about 90 pages long, which is sometimes how long a 90-minute or two-hour movie is. There are so many different departments on our show that have to work in complete harmony to make every single frame sing. That’s something I didn’t really know until I was on set [for ‘The Marvelous Mrs. Maisel’] working so intensely every day.”

Rowan Blanchard, Dev Hynes aka Blood Orange (who treated guests to a performance of some songs from his new album “Negro Swan” and an older track from “Champagne Coast” inside the party) and his girlfriend Ana Kras also showed up, along with Bria Vinaite. But eyes were out for Chopra, who herself wore an engagement ring from Tiffany’s that her fiancé Nick Jonas gave her. She said he and his brothers embarked on a covert mission to purchase the rock for Nick’s “future wife.”

“I’m still getting used to the idea of it,” Chopra laughed.

Recently, the actress has invested in tech start-ups like Bumble and Holberton, a coding and software engineering school. When asked where she sees her participation in venture capitalism going, Chopra responded, “I’ve never been someone who thinks about an end goal. I think about the journey.

“I’ve been very instinctive; the same way that I pick my projects, I pick what I invest in. [I ask myself,] ‘If I had the opportunity, would I use this? Would this be helpful to me?’ Because I am a girl who comes from a small town in India. I’ve traveled the world. I believe I’ve lived life in many stages of different women, so I can think for a lot of women, because I’ve had each kind of upbringing. Those are the kind of things that I want to invest in, that I feel move the needle for the world a little bit.”

Barry Jenkins Brings ‘If Beale Street Could Talk’ to Harlem