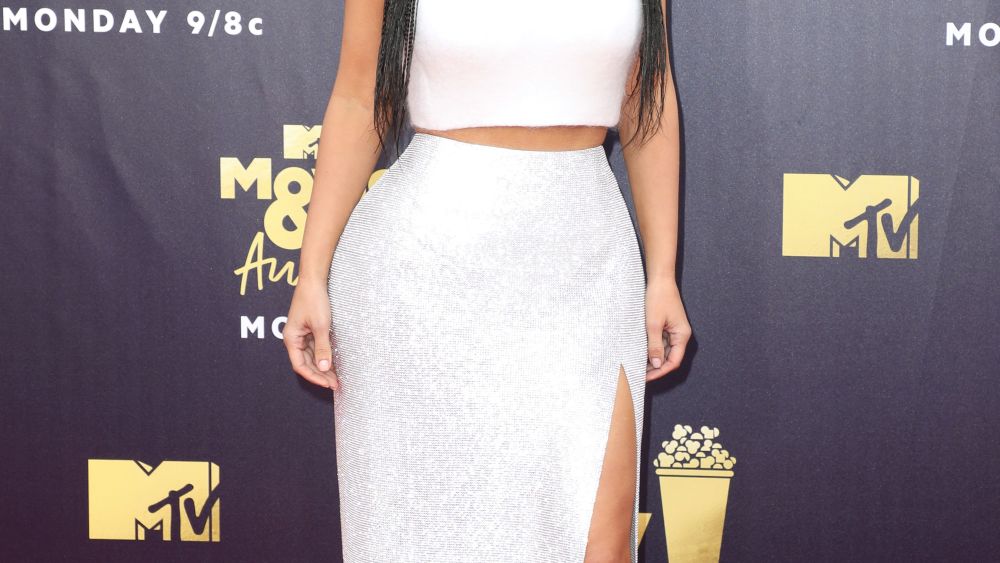 The 2018 MTV Movie & TV Awards, which took place on Saturday, proved to be a collection of fashion firsts and risks as starlets walked the red carpet just outside of Barker Hangar in Santa Monica, California.

“It was a little out of the box for me,” nominee and “Riverdale” star Madelaine Petsch confessed as airplanes took off above the venue, located within Santa Monica airport. “I’m not used to wearing color or sparkles, but I feel confident,” she said of her Prada gown. While holding her beau Travis Mills’ hand, whom she affectionately referred to as her ‘security blanket,” she said, “My zipper broke today, so I’m safety-pinned in. Every single award show something happens to my outfit. He comes and holds my hand and breathes with me. He keeps my anxiety away, so I don’t cry.”

And although they aren’t a real-life couple, on-screen pair Tessa Thompson and LaKeith Stanfield who co-star in the upcoming film, “Sorry to Bother You” were up for the coordination challenge. “I’ve never worn red, it sort of feels like a dare,” Thompson said of her Rosie Assoulin look. “But Keith sent me a picture of what he’s wearing and we thought it would be fun to come as prom dates.”

“Westworld” star Thompson, who went to Santa Monica High School, is also a singer. She revealed that for the “Creed” sequel due in November, she recorded some music for the soundtrack. “I got to work with a wonderful producer named Ludwig Göransson who has made all of the Childish Gambino records and he scored Black Panther and I come from a musical family so it’s cool to sort of explore that.” Thompson’s father has a band called Chocolate Genius Inc. and said she grew up listening to everything from Nina Simone, Joni Mitchell and The Rolling Stones to Cypress Hill, Wu Tang Clan and Portishead. “That’s certainly kind of an inspiration for the music that we made, sort of electronic R&B,” she said.

“Thirteen Reasons Why” star Katherine Langford, making her second appearance in as many show seasons, came in a custom Armani pantsuit and headpiece. “I play a 17-year-old girl,” said the 22 year old. “It’s hard to explain but essentially she’s dealing with the reality that all of her classmates start spontaneously combusting. I’d say it’s like a rom-com-sci-fi.”

Earlier on, MTV host Liza Koshy quipped about her fashion evolution, “The first time I showed up in Wet Seal or something. Now I’m here wearing Prabal Gurung.” As one of the new hosts of MTV’s reboot of “Double Dare,” Koshy was excited to see Tiffany Haddish emcee the show. “I’m the knock-off Tiffany Haddish,” she joked.

Sincerity may be rare in Hollywood, but the theme played on as Lena Waithe spoke of the Trailblazer Award that she would be honored with later in the night (the awards show won’t air until Monday night, but Waithe’s award was revealed ahead of time). “It means to be your authentic self,” she said. “You can’t help but to blaze a trail because no one has done it before. I didn’t want to be white; I didn’t want to be straight. I wanted to be black. I wanted to be gay as f—k. At first I was nervous, but then I was like, ‘That’s dope, that’s who I am. I’m a masculine presenting lesbian; I don’t know how to be anything other than that. When people see me they see something to connect to because I’m just myself.”