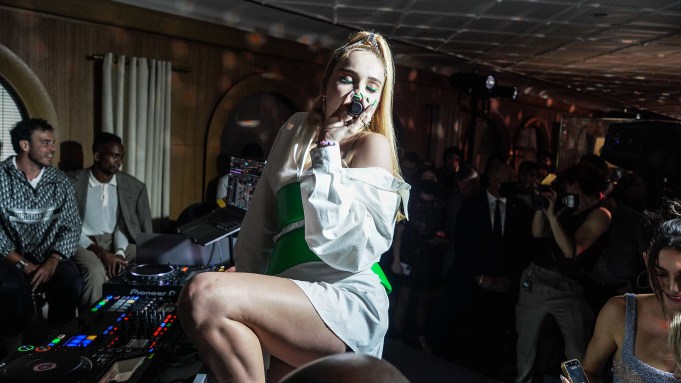 On Thursday night, the singer was waiting to cap her fashion week experience with a performance at L’Avenue at Saks. Before taking the stage for around 10 p.m., she was doing her best to conserve her voice, trading the packed main room of the party for the relative calm of the long foyer leading into the space. She was dressed in a Bottega Veneta dress accented with a neon green belt and bright pink Versace platform heels; her outfit was accented by green, pink and yellow eyeliner. “I love makeup and I didn’t wear it during quarantine so now I’m, like, hell yea — let’s go crazy.”

The singer spent lockdown writing new music — she released her latest single in late August — and has been excited to get back onstage. She’s gearing up to perform at the VMAs this weekend, and her performance at Saks followed recent appearances at Lollapalooza and in Columbus, Ohio, for GSWS, an annual LGBTQ sporting event.

Fans will be thrilled to know that even more music is on the way. The German singer recently signed with Republic Records and has finished recording her debut album, which she describes as her “proudest work ever.”

“It’s my most brave in a way, because this is the music I always wanted to make but was too scared to make,” said Petras. “It’s all inspired by European music, it’s kind of like my party trick songs,” she adds. “I’m getting to bring a little bit of my childhood into my music, which is so exciting because I put that music on in early quarantine, and it made me forget about what was going on. And that’s what I want to do: I just want it to be fun, joyful, and make you forget everything. I think that’s what I needed, and I feel like that’s what people need — just some fun.”

The singer added that being at Saks was also a full-circle moment. “The first time I got to pick out a designer outfit three years ago was here, I wore Prada for the first time. They supported me early and were champions for me.”

Another one of her earliest champions was in the building: Paris Hilton, who was on DJ duty before and after Petras’ performance. “She’s kind of been my fairy godmother,” Petras said. “She really was there from the very beginning, like ‘this girl’s cool, check her out.’ So I owe her and love her.”

Downstairs, “Pose” actress Dominique Jackson was outside on the garden terrace flush with the store’s shoe floor overlooking Fifth Avenue. Similar to Petras, Jackson credits Saks as an early supporter, and Jackson was part of the store’s holiday lighting ceremony this past December.

“When I first got onto ‘Pose’ and I needed clothing to wear, I’d go to other high-end stores and I was having issues with help,” she said. “When you work hard and you spend money, the last thing you want if you walk into a store and are about to spend $800 on a sweater or shoes is for someone to look at you like you don’t belong there,” she added. “But when I came into Saks I saw my own people being employed….I felt like I was a part of something. I felt like I was shopping, not just spending my money.”

In the months since “Pose” aired its series finale, Jackson has turned her focus to self care.

“I’m working on accepting that I am valued, and that I do mean something to people, not just my family and friends,” she said, as the music turned up — upstairs, Hilton was on deck. “I’m accepting the fact that I struggled and it was worth it — every minute, every trauma, was worth it.”

Bulgari Brings the Party Back to the Standard

Fantasy Front Row: Who We Want to See at the NYFW Shows