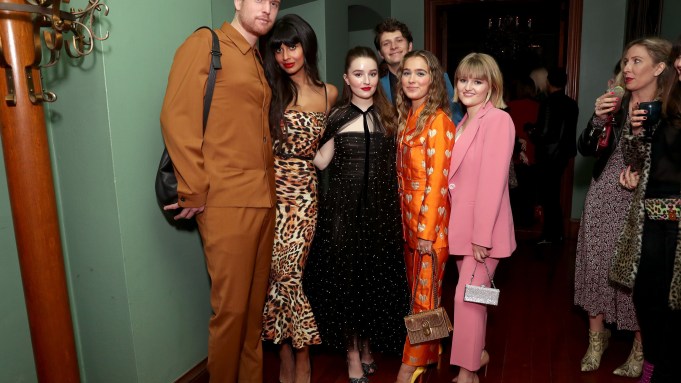 Singer-songwriter Mikaela Mullaney Straus, better known as King Princess, was in high school when she was treated to her first pair of Christian Louboutin soles. It was courtesy of her stepfather, who’s a friend of the French designer’s, and the occasion was her senior prom.

“He brought me to the store, and they just treated me like a queen and got me a nice heel, which I never wear now because I can’t wear heels anymore ’cause I’m gay,” she said, almost in one breath, on Thursday night in Los Angeles. “But I loved the experience.

“What’s amazing about Louboutin, when I was a kid, my perception of it was heels, and now I’m wearing these gorgeous f–king clompers,” she continued. “Christian is the type of designer where it’s like gay, straight, whatever the f–k you are, whatever shade, whatever color, whatever gender, whatever sexuality, there’s a shoe.”

Straus, the night’s musical entertainment, is off the heels of a debut “Saturday Night Live” performance and is getting ready to join Harry Styles on tour in 2020.

The 20-year-old Brooklyn native is signed to Mark Ronson’s label Zelig Records, which released her album “Cheap Queen” in October. “Taking over this s–t baby,” she shared playfully of her plans for the new year. “I’m just excited to put out more music eventually.”

Working with stylist Sean Knight for the night, she opted for a purple, tailored Versace men’s suit, paired with Christian Louboutin accessories, naturally, including the designer’s new “Elisa” handbag — the item of the hour. The party, a collaboration with InStyle, was in fact held to celebrate the new release.

The bag is named in honor of model Elisa Sednaoui Dellal, a friend and muse of the designer.

“To be honest, it was a surprise and a gift and like everything Christian does, it’s done with such simplicity and generosity and attention to every detail, so I’m very lucky,” shared Sednaoui Dellal inside one of the more elaborate rooms — with pink colored walls and a green ceiling — of The Paramour Estate, a historic, lavishly decorated, 22,000-square-foot residence in Silver Lake that dates back to the early Twenties. It was Sednaoui Dellal’s first time visiting.

“I live in the west, so I don’t often come to Silver Lake,” she said. “Today was the adventure. It’s an exceptional house. I mean, you see amazing houses in L.A., but there’s something here that’s above normal.”

It was a long drive for actress Danielle Lauder, too, she said, but “worth the trip.” “I was like, ‘Oh, the travel,’” said Lauder, great-granddaughter of Estée Lauder, who recently unveiled her own cosmetics collection for the brand. “But this space is so cool. I would have traveled for two hours longer.”

Louboutin is a friend of the property owner, Dana Hollister, and unlike most of the guests, he’s been many times before, he shared.

“It’s a place that I’ve known for a very, very long time,” he said. “The first time I went here was probably 15 years ago. It reminds me of old Hollywood in a way. And, well, where else can you find a 360-degree view where you see basically all of Los Angeles? The first place that came to my mind is here, because it’s one of my favorite places.”

“They were gifted to me as a wrap present for ‘White House Down’ by my director Roland Emmerich,” King said. “From the time I was a young girl, I’d always been so obsessed with heels. I always wanted to wear heels.

“When that day finally came, I opened that box and saw those beautiful, red bottom soles, my life changed,” she continued with a laugh. “I think a good pair of heels can make — I’m feeling a little under the weather right now, but the minute I put on my Louboutin, it made me feel better.”