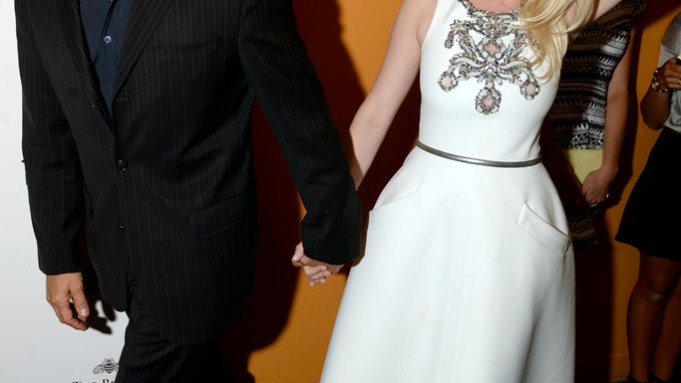 Wednesday night, it was all but assumed that Kirsten Dunst would be wearing Rodarte to the screening of her latest movie “The Two Faces of January.” After all, Kate and Laura Mulleavy cohosted the event and Dunst has been a longtime friend of the brand. When she emerged in a cream Neoprene Chanel haute couture frock, it was just the first plot twist of the night.

The film — which has already earned an 86 percent approval on Rotten Tomatoes — has all the makings of a Hitchcockian thriller: suspense, intrigue and midcentury, jetsetting glamour. It’s based on the Patricia Highsmith novel of the same name (she also wrote “The Talented Mr. Ripley” and “Strangers on a Train”) and tells the story of a wealthy American couple — Dunst and Viggo Mortensen — touring Greece and Istanbul in the early Sixties. They befriend a con artist scamming travelers, but soon a murder at the couple’s hotel forces all three on the run.

The film is the directorial debut from writer-director Hossein Amini (who also wrote “Drive”).

“Even though [the main characters] are criminals and devious, in a way there’s also a humanity to them,” he said as moviegoers — Sofia Sanchez Barrenechea, Cory Kennedy, Maxwell Osborne, Michael Stipe, Lily Kwong, Kim Gordon and Victoria Traina — made their way into the Landmark Sunshine theatre. “Viggo was happy to play drunk, jealous, paranoid…ugly qualities, and weak even, which is what a lot of movie stars don’t necessarily want to be seen as. Viggo embraces that part of his character,” he said of Mortensen’s character, the tragic hero.

“It’s nice to play something different,” Mortensen affirmed. “I’ve never played a guy like that, a guy from that generation, who wears those kinds of clothes and has those kinds of values, that code of ethics. A man who grew up in the Great Depression and served in World War II. Those film noir-type characters.”

Afterward, the crowd mosied over to the after party, at the nearby Jazz Room at The General, where Mortensen was finishing up a private dinner behind a guarded velvet curtain and the Mulleavy sisters had holed up with Dunst in a corner booth.