The L.A. Lakers legend celebrates his new HeroVillain watch from Hublot with a slithering snake and a round of Mad Libs. 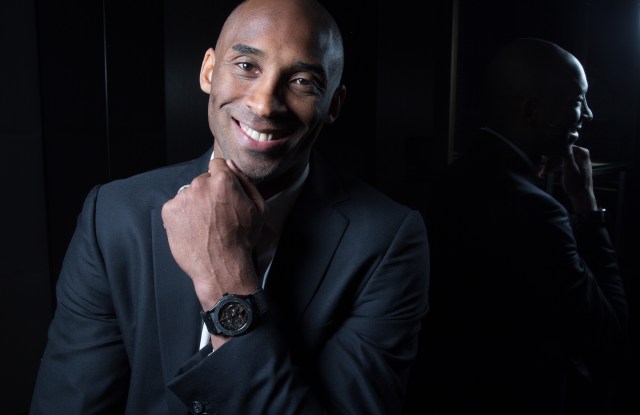 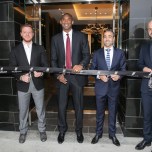 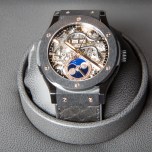 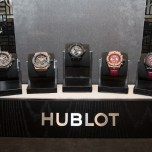 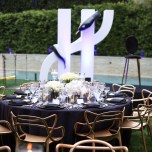 Even retired after a 20-year run in the NBA, five championships with the Los Angeles Lakers and a pair of Olympic gold medals, Kobe Bryant still commands an audience.

Stepping out of a black SUV on his way to christen the freshly renovated Hublot store in Beverly Hills on Wednesday night, he stopped for a selfie with several Mexican tourists. Never mind that he was 20 minutes late and a crowd began to swarm the block around the corner from Rodeo Drive. A construction worker wearing a hard hat and neon-colored safety vest bellowed the basketball star’s name from the middle of the street. A portly guy in a Los Angeles Dodgers cap counted his blessings, telling no one in particular: “It’s like my birthday and Christmas all in one.” A hipster dude in white sweatpants and tan tunic couldn’t believe his luck in being so close to his 37-year-old idol, who shares his birthday. “We need to stay, bro,” he told his friend. “I’m not going anywhere until I get a picture. I’ll buy a watch right now.”

That superfan should have had $20,400 in his pocket. That’s the price of the limited-edition watch, which was nicknamed the HeroVillain after Bryant’s two personas on the court. It was designed with a ceramic case, gold screws, snakeskin strap and a snake with gold eyes and tongue writhing under the glass face. The third in Bryant’s series with Hublot — following the Black Mamba in 2013 and Vino in 2015 — the timepiece is a symbol of a new phase in the NBA star’s life. While the previous two styles were sporty, this is his first dress-up watch.

Indeed, Kobe Inc. is a media company focused on creating, in Bryant’s words, “timeless stories” that can inspire kids.

“We are absolutely obsessive about publishing and producing,” he said. “We have one clear focus — it’s storytelling.”

Even with Bryant out of the game, the LVMH-owned Swiss watchmaker already boasts numerous collaborations with other active athletes, including Dwyane Wade, Usain Bolt, the Dallas Cowboys and Chelsea Football Club.

For its dinner following the store party, at a sleek mansion in Beverly Hills, Hublot called on Erin Andrews, who’s a friend of the brand as well as a host of Fox Sports’ college football games and “Dancing With the Stars,” to interview Bryant while guests scooped up burrata from a mini jar, slurped squid ink linguine and ravaged chunks of ossobuco. Before stepping onto the dais set up in the backyard, she fielded some questions for Bryant from her boyfriend, Jarret Stoll of the Minnesota Wild. “Does he work out? Because when I’m not playing, I’ll do nothing for a while,” the ice hockey player told her.

Sure enough, the day after his final game with the Lakers, Bryant woke up at 4 a.m. to do his usual routine of wind sprints on the treadmill and weight-lifting. He also spends a lot of time grooving with his 10- and 13-year-old daughters to dance video games. “You can’t walk around with ‘Pudgy Mamba,'” he told the diners, who laughed at a possible new nickname for the trim 6 foot, 6 inch athlete. “It’s not a good look.”

As for the crazy looks sported by Russell Westbrook and younger players in the NBA, Bryant was at a loss for words. Despite dressing like Wesley Snipes as comic-book hero “Blade” for a past visit to the White House, he said, “It’s not my cup of tea. If you see me walking around like that, drug-test me immediately.”

Eventually Bryant sought courage through alcohol when guests took turns recapping his career in a round of Mad Libs that came across like a roast. Not only was he described as “the juicy beef” but he also was compared to a Rihanna song. “Give me a drink, man,” Bryant told a tablemate. “Pudgy Mamba” may be a no-no but “Tipsy Mamba” sipping Dom Pérignon was a slam dunk.