On Tuesday night, the couple was honored at SAB’s Workshop Benefit at Lincoln Center. 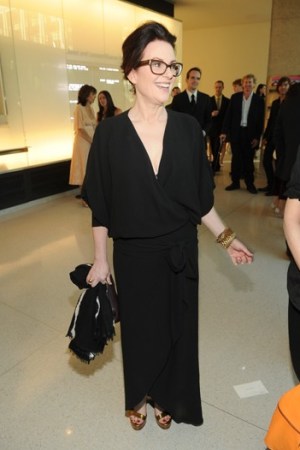 Women who took ballet as a child usually hold on to at least one aspect of dance throughout their lives—be it good posture, a penchant for buns or the irrational fear of slim, gray haired ladies barking for a tendu.

Coco Kopelman, a former student of the School of American Ballet, definitely maintained her carriage (her hair’s too short for a bun and no word on her phobia of strict instructors), and has been a staunch supporter of the organization with her husband Arie for over two decades.

On Tuesday night, the couple was honored at SAB’s Workshop Benefit at Lincoln Center co-chaired by Chanel U.S. president John Galantic and his wife Sasha, among others. Before guests such as Debbie Bancroft, Pamela Joyner, Peter Bacanovic and Megan Mullally watched the students perform a series of three ballets, Kopelman was presented with peonies by her granddaughter Sadie Kargman.

The 6-year-old is an up-and-comer at SAB, and it appears that rhythm runs in the family. After sitting patiently through the post-performance dinner, Kargman took to the dancefloor with a vengeance, breaking out her best robot for the teenage ballerinas.