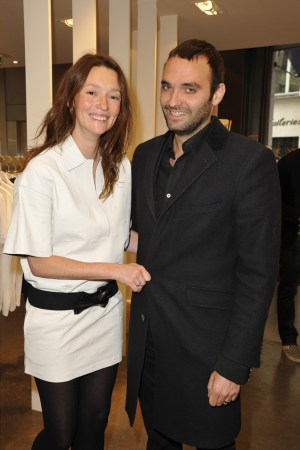 Paris had not yet completely emptied of actresses on Tuesday night, on the eve of the Cannes Film Festival.

And so Reed Krakoff, who swept into town to launch his latest photography book at Colette, greeted the likes of Kristin Scott Thomas and Audrey Marnay as waiters circulated proffering Champagne and coconut water.

Scott Thomas is on her way to the festival for the premiere of “Only God Forgives,” a violent drama in which she plays a stern, potty-mouthed gangster mom opposite Ryan Gosling.

Marnay was dressed in a loose, white leather dress. And who designed it?

“Take a guess,” she said with a laugh, pointing to the multiple alligator logos stamped in relief, indicating it was a Lacoste number.

Marnay impersonates Gabrielle Chanel in the film, “Opium,” being screened on May 23 at part of the Cannes Classics section. The feature by singer Arielle Dombasle and “curated” by Pierre Bergé is based on artist Jean Cocteau and his inner circle, she said.

As for her Chanel costumes, Marnay said she wore a combination of vintage and current ensembles, both ready-to-wear and couture.

Krakoff, who signed copies of “Women in Art” for the artsy crowd, said he doesn’t labor over portraits, preferring an organic and spontaneous process. “It usually takes 20 minutes, max,” he said.

The Assouline coffee-table book is slated for a broader release in June.

After the party, Krakoff and Colette’s Sarah Andelman repaired to Caviar Kaspia where they hosted a lavish dinner for 40 capped off with chocolate Ladurée macaroons in all-black packaging designed by Krakoff.

Egged on by his chief executive Valérie Hermann, the designer stood and delivered a thank-you speech in pitch-perfect French, prompting a burst of applause from the Parisian crowd.