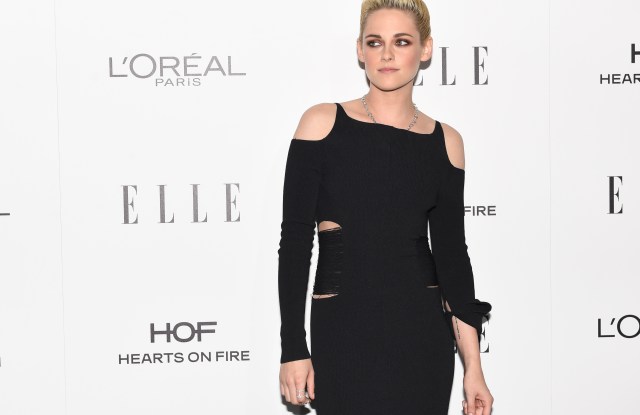 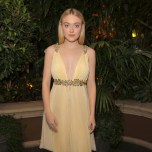 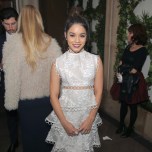 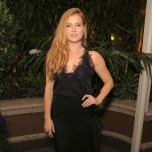 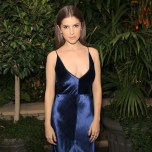 Hollywood awards season is ramping up, which means a heavy list of stars is in rotation to pick up trophies for any number of achievements. As such, Kristen Stewart, Amy Adams, Felicity Jones, Lupita Nyong’o, Anna Kendrick, Aja Naomi King, Helen Mirren and Kathy Bates were at the Four Seasons Hotel in Beverly Hills on Monday night for the Elle “Women in Hollywood” honors.

“If you look at the list of ladies who have done this before — and not just tonight — but the last few years, it’s insane to include myself in that list,” said Stewart, who also appears on the magazine’s November cover. “Any way to keep the ball moving [women] forward is something I want to be a part of. These dinners haven’t always been happening. It’s important, you know?”

Stewart has had several recent projects, including “Café Society,” “Certain Women” and next year’s “Personal Shopper,” in which she plays an American working as a personal shopper in Paris. The Roberto Cavalli-clad actress described the role as “one of the most isolated, lonely, deep, and existential-crisis sort of characters that I’ve ever played.” She paused. “Those are usually characters that I’m drawn to, but this one was the most fundamental. It was a lot to chew on.”

Mirren sang the 26-year-old’s praises. “Kristen’s got a very wonderful, magical quality about her and I’m interested to see where her acting life takes her.” Meanwhile, the Oscar winner said she was genuinely “amazed” to be included in a “prestigious fashion magazine.” “I’m so not a very fashion-y person,” insisted the veteran, who stars in “Collateral Beauty” this December. “I’m probably too eccentric to ever be fashionable.”

Bates echoed the sentiment. “I never expected to be on the cover of a magazine like Elle at all. Much less at 68,” she deadpanned. Bates will next star on Chuck Lorre’s Netflix comedy “Disjointed.”

“Just to be asked to sit at a table is neat for me,” said “Pretty Little Liars” star Hale. “I’ve been steadily working since I was 16, but I always feel special when I get those e-mails, saying, ‘You’re invited!’”

“Unreal” actress Appleby agreed: “How exciting that I’ve gotten to that place in my career where I’m not just going from audition to audition, and I’m invited to a dinner celebrating women in Hollywood.”

Over a three-course meal of heirloom tomato salads, roasted Alaskan halibut, and vanilla bean crème brûlée, Elle editor in chief Roberta Myers greeted the crowd before handing things off to the night’s emcee, Anthony Anderson. The “Black-ish” comedian fared well. However, it was “The Accountant” costars Kendrick and Affleck who drew the night’s biggest laughs. After giving Kendrick a heartfelt introduction, Affleck whispered in her ear, “I crushed it.” She then teased him that he looks like “the guy in the stock photo of a psychology textbook in the chapter about a sociopath.”

Meanwhile, Fanning provided the crowd with a small glimpse into her friendship with Stewart, whom she met while working on 2009’s “Twilight: New Moon.” “She has held my hair back and talked me through heartbreak,” Fanning shared. “I can’t present any award to Kristen Stewart and not say f–k. So…I love you so f–king much.”