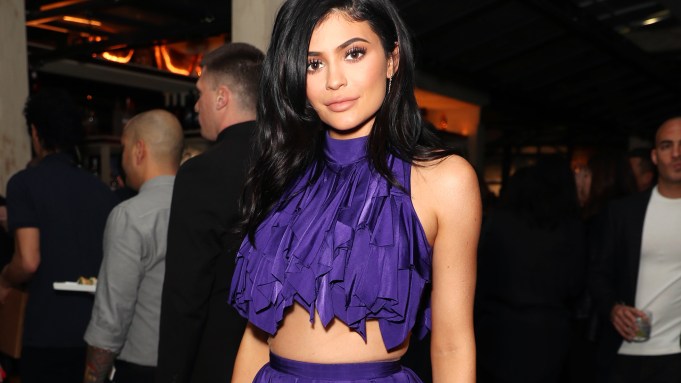 The night also drew Balmain’s Olivier Rousteing, who received the “Icon: Designer” award presented by Crawford. “I have my men’s wear fashion show in, like, eight or 10 days, but I took a flight tonight just to be here,” he said. “I’m leaving tomorrow.” He added, “Balmain is going to be really, really close to L.A. in a few months for so many reasons.” Perhaps Balmain is joining the showing-in-L.A. ranks? “I can’t tell you more,” he said.

Seconds later, one of his loyal supporters, Kylie Jenner, arrived. “Aw, thanks,” she told a guest who complimented her look from Balmain’s resort collection. “He’s amazing,” Jenner cooed, before being escorted to a booth, where she sat next to Rousteing.

Meanwhile, hairstylist honoree Chris McMillan said Aniston’s husband Justin Theroux helped him prepare. “He loaned me his tie bar. He loaned me his cuff links. He groomed my face. I really felt what it was like, the importance of what we do, because just that little bit of attention [made me] feel comfortable.” Even so, he admitted, “I belong behind the camera, not in front of the camera.”

“New Guard: Makeup Artist” honoree Daniel Martin kept close to client Alba. “It’s an honor to be able to highlight the work that your friend is doing,” she said, as Martin dutifully nodded his head. “We work together not just to put together looks for a red carpet but we work together at Honest Beauty. He is my creative consultant and helps product develop our color line.”

As Jenner nibbled on pint-sized burgers and Alba sipped Champagne, Aniston presented McMillan with the first award of the night. “I’m trying not to cry,” Aniston said, visibly emotional while discussing her friend of 20 years. “Where’s the beta blocker when I need it?”

Robbie spoke in support of “Icon: Makeup Artist” award winner Pati Dubroff. “Let’s not forget that, 30 years ago, Pati was working the makeup counter at Bergdorf’s by day and dancing on a lesbian bar in the Lower East Side,” Robbie said. “Really, we’ve all got to start somewhere.”

“With the rise of social media, a lot of the ‘image makers’ have become stars in their own right,” said Fulenwider. “We were pleasantly surprised to see the connection between the celebrities and their image maker and how much they love them.”