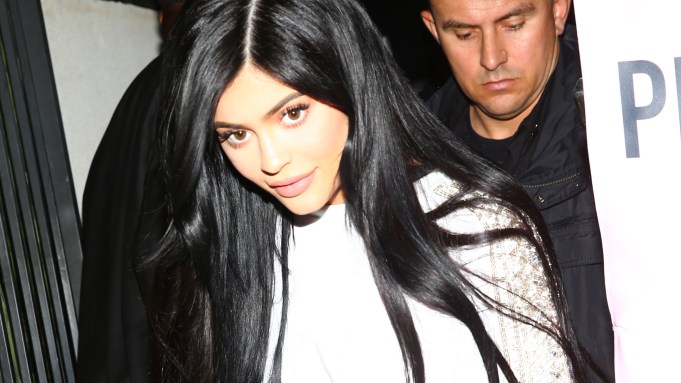 On Tuesday night, Manchester-based e-tailer PrettyLittleThing celebrated the launch of its curated collection for curvy customers “Shape x Stassie” with a bash cohosted by the social media phenom at The Phoenix in Los Angeles, where she was joined by rapper Travis Scott and her best friend Kylie Jenner.

A few miles away and a few hours earlier, the pre-party was already in progress at the PLT Penthouse. There, Anastasia Karanikolaou, also known as Stassiebaby, received the full glam treatment with her Insta-famous crew Madison Beer, Claudia Tihan and Samuel Rauda.

“The big reason why I was so into doing this is it’s so hard for me to find clothes that fit my body type,” she said after taking a break from her makeup team.

Although fully in love with her look now — curves are trending — it wasn’t always that way for the 19-year-old. “I used to be really insecure. I would never want to wear a bikini or be in a tight dress because I wasn’t happy with myself. It took a really long time to realize that everyone has flaws. Everyone has rolls when they sit down. No one is perfect,” she said.

She said she was happy to lend a hand to the PLT design team. “The clothes fit curvy girls so well,” she cooed of her lilac bodycon dress. “They designed most of the clothes and I went in and did a couple of tweaks.”

The social media-savvy label, owned by Boohoo.com, is known for tapping Insta-famous models as collaborators, beginning with Jenner, then her friend Jordyn Woods, Sofia Richie and now Karanikolaou.

What seemed like eons later, the girls were whisked away to the event. “I told them I wanted to be involved with the party, but I also wanted some things to be a surprise,” she said.

Besides a photo booth, which she knew to expect, the venue had a Candy Lip station and a gratis pop-up shop. While a stream of hip-hop hits from Big Sean to Kendrick Lamar were spun by DJ Casanova, a hive of guests clustered behind the photographers, recognizing that Jenner was on the scene. Unfortunately, the security guards mistook her for the president and ordered a full and immediate removal of all photographers from the premises.

Of her famous BFF, Karanikolaou noted, “I don’t see any difference; I’ve been friends with her since we were like 10, so it’s not weird.” The two even take their friend goals one step further by swapping clothes. “Half of my closet is probably from Kylie,” she said with a laugh.

Scott, who appeared to be camera shy, posed for some snaps with closed lids. The rapper was on hand to perform “Pick Up the Phone” and “Goosebumps” for the crowd including Woods, Mila J and Corde Broadus, who talked style tips from his famous father Snoop Dogg, saying, “Stay suited and booted. Don’t look like you don’t belong somewhere.”