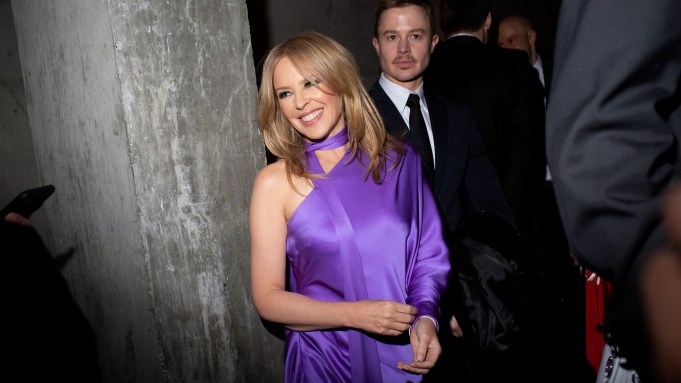 Kylie Minogue is a proud Aussie, and before being honored at the third annual American Australian Association Arts Awards, she remained affected by the fires still raging across the continent.

“I thought it would’ve been quite a struggle to come to an event like this, celebrating everything when everyone’s affected, everyone’s distraught by what’s happening,” she said. In light of the natural disaster, the AAA pledged all of the evening’s proceeds to the Australian Red Cross for fire relief efforts. “So the fact that the proceeds are going to what’s happening is beyond essential.”

Minogue wasn’t the only honoree at the event: Being honored alongside her was writer Peter Carey, while “Euphoria” actor Jacob Elordi received the Rising Star award for the evening. Among the guests were Zendaya, Naomi Watts, Katie Holmes, Deborra-Lee Furness and the evening’s hostess, InStyle editor in chief Laura Brown.

The sense of community permeated the night, with most of the attendees having met each other at least once. “Naomi Watts and I, we just go to Australia events,” Brown said. “It’s really funny. I’m like, ‘Saddle up, sister. We’re going to another one!’”

Similarly, Minogue remembers first meeting Elordi on the set of her 2018 film, “Swinging Safari,” where she learned his physique as much as his skill, she said. “He played a character called Rooster, who was mostly in a bathing suit, so I mostly saw his back!”

Ahead of presenting Elordi with his award, his “Euphoria” costar Zendaya kept the accolades to a minimum — “He’s the best, absolutely the best,” she said — but didn’t hold back onstage. “Thank you for being so wonderful at what you do, and for taking it so seriously, and being so wonderful to work with. Contrary to your character, you are a wonderful, wonderful human being,” she said.

Before thanking Zendaya, he at first only looked into the crowd before saying, “Naomi Watts is here!”

Watts shared the love, later saying, “I was honored that Jacob gave me a shout-out, I was very charmed. His work is incredible.” Ahead of presenting Minogue, she echoed the singer’s sentiments regarding the fires back home. “There’s so much damage to repair right now, and it’s not ending, we’re not out of the woods, so it’s absolutely vital that we come together as a community to do what we can to support our country.”

They Are: Not Letting the Press In