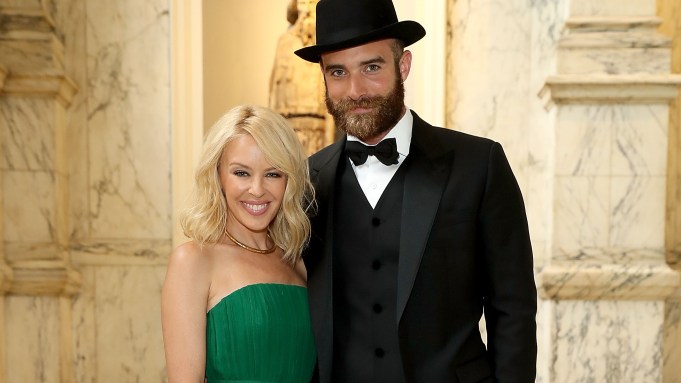 LONDON — There were some interesting interpretations of black-tie dressing at the third One for the Boys Ball on Sunday Night. David Gandy arrived with his hairstylist and friend Larry King in a combined palette of chocolate brown, cream and blush pink – but they were owning it. “Well, that’s the best thing about fashion week, isn’t it? You can kind of ignore the rules,” said Gandy.

Held at the Victoria and Albert Museum, the ball was hosted by Samuel L. Jackson and Stanley Tucci, who, along with the charity’s founder, Sophia Davis, assembled the likes of Bon Jovi drummer Tico Torres, Chinese actor and model Hu Bing, Eva Herzigova, Oliver Cheshire and Haley Joel Osment, who took to the catwalk after dinner and hammed it up in examples of British men’s wear.

Torres was feeling confident about his catwalk turn. “Why would I feel nervous about walking [on a catwalk]? I’ve been walking my whole life,” he joked. By contrast, despite his professional modeling qualifications, Bing was squirming after his walk. “That was embarrassing,” he cringed.

Performances by Kylie Minogue, Nicole Scherzinger and Tinie Tempah were also part of the night’s entertainment, alongside a tear-jerking short film by Sarah Waters aimed at encouraging men to talk about their health concerns and gain the support of loved ones when suffering from all forms of cancer.

“Men think because we are men we don’t have to go to the doctor but it’s very important to get yourself checked out. If not for yourself, then for the people around you,” said actor Anthony Mackie, who recently played Martin Luther King Jr. opposite Bryan Cranston’s Lyndon B. Johnson in the HBO film, “All the Way.” “When I turned 30, I woke up one day, my back hurt, my hip hurt, my head hurt and I went out partying with my friends and the next day I didn’t recover the same and I was like, ‘I’m getting old.’ I realized my mortality. After that I started going to the doctor every six months.”

Scherzinger had arrived late in a white leather strapless dress by Nicholas Oakwell and a towering pair of Louboutin pumps, which she promptly removed when she was ushered behind a marble pillar and up to the dinner. After singing a mash-up of The Pussycat Dolls’ “Don’t Cha” and Maroon Five’s “Moves Like Jagger”, she dedicated a performance of “Purple Rain” to the memory of Prince, with whom she had spent time shortly before his death in April. “I didn’t want to sing this song but Mr. Jackson asked me to, so you’ll have to bear with me because I’ve never sung this song before,” she said to the audience.

It had taken over a year to get Minogue to the stage. “All those e-mails paid off,” she joked to Davis in the audience, before she sang a moving rendition of “I Believe in You,” also requested by Jackson. The singer, who had survived her own battle with cancer, wore a green DSquared2 gown.

Robert Konjic was thinking of his own musical abilities, ahead of a karaoke party set for Monday night, a second One for the Boys event in as many days. “I’m a terrible singer. I might just have to find five people and shout a song into a microphone,” he said. “I usually choose something really flat and toneless like Iggy Pop’s ‘The Passenger,’ but I can’t sing that, it’s five minutes long, everyone will hate me if I sing a song that long.”

After dinner, Tempah lifted the mood — and people off their seats — with an energetic performance of his boisterous hit, “Pass Out.”

“Tinie Tempah is the most important artist of our generation,” Jack Guinness intoned gravely, adding an arch wink for effect.