The famed Manhattan eatery kicked off a monthlong celebration on Monday. 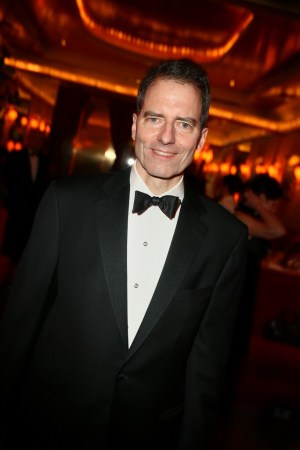 New Yorkers are picky when it comes to their dining experiences. It’s a tough business to weather, especially in the oversaturated market of Manhattan. In a town where even celebrity-chef-helmed eateries can tend toward evanescent existences, La Grenouille is an anomaly. The storied restaurant marked its 50th anniversary Monday night with a fete at its 52nd Street location.

Well-groomed servers dressed in cream tuxedos welcomed guests upon arrival, politely insisting they take a flute of Champagne. Under the entrance’s grand chandelier, festively embellished with a cluster of glass ornaments and a swirl of gold ribbon, guests queued up to congratulate second-generation owner Charles Masson, much like a wedding’s receiving line. Masson’s dress, a tuxedo, only added to the verisimilitude.

Masson recalled the first time he stepped foot in the space.

“I was seven years old,” he said. “It was before the restaurant even opened. The door was on the other side; actually, it was two red wooden doors. Very low ceilings. It has changed quite a lot. But my father always had the good sense to have flowers in the restaurant.” He pointed to the explosions of cream lilies and holly around the room.

Trays of hors d’oeuvres (classic French fare, naturellement) beckoned, with partakers snatching up leek tarts, crab cakes and potato circles topped with a dollop of crème fraîche and caviar. Guests sank into the crimson velvet banquettes skirting the cream-clothed tables scattered around the space, and basked in the glow of the bronze lamps atop each table. Mellifluous, jazzy tunes — courtesy of a violinist, bassist and guitarist stationed in the back — floated through the room.

Isaac Mizrahi reminisced. “The first time I was here was with Manolo Blahnik and George Malkemus in 1986,” the designer said. “It was plus fabulous.” Many attendees proved their polyglot status, conversing in both English and French. Instead of asking Champagne-toting guests if they’d like a refill, servers would simply inquire, “Ça va?”

“I hope this is just like the halfway point and we get another 50 years of La Grenouille,” Mizrahi said shortly before ducking out. “It’s lasted this long because it’s just been flawless.”