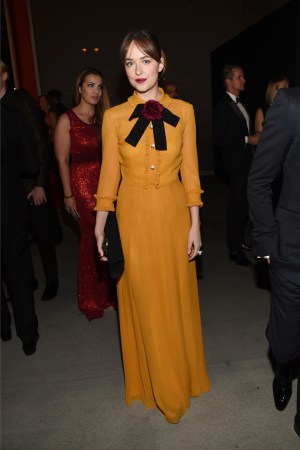 The LACMA Art + Film Gala’s reputation precedes it as a gathering of the city’s creative elite, one of the starriest fetes of the fall party season. Presented by Gucci, it was also creative director Alessandro Michele’s first experience with the five-year-old event. “Intimidating? A bit; it’s not exactly my way of life,” said Michele, entering the museum’s outdoor courtyard via the teal-carpeted step and repeat. “It’s quite nice because you can meet a lot of really nice people. But the red carpet is a little bit scary every time. I know it is just walking, but it’s different.”

When asked whether he preferred art or film, Michele said, “It’s hard to choose. My mother worked in the cinema during the golden age of Cinecitta [as personal assistant to head of MGM’s Rome office] so I grew up around it, and old movies especially are a big piece of my reference.”

Witherspoon said she was a fan of the event because “actors and artists inspire one another. And I get to meet a lot of the artists that I admire.”

“I love when you see this type of camaraderie with so many people from different fields coming together to celebrate art,” said Usher, who came with artist pal Retna.

Had organizers known he was coming, they might have asked him to fill in for Sam Smith, who fell ill a few hours before the event. At the behest of T Bone Burnett, The Eagles’ Joe Walsh gamely took on the gig at the last minute, regaling the crowd with the story behind his famous song “Life’s Been Good.” “I live in hotels, tear out the walls, I have accountants pay for it all,” he sang, before telling the crowd, “I met John Belushi in Chicago and the next day the hotel bill was $27,000.”

Just before the sing along, co-chair Leonardo DiCaprio presented the film honor to director Alejandro González Iñárritu, with whom he became friends when working on the upcoming “The Revenant.” “He’s a creative force who is bold, absolutely passionate and absolutely fearless — an artist in every sense of the word,” said DiCaprio.

“I consider the honor I’m receiving a recognition to the whole Mexican community for their hard work and vibrant cultural contributions made to L.A. and the United States,” said Iñárritu, a Mexico City native and vocal advocate for undocumented citizens.

Turrell said he was impressed by what the L.A. art scene has become. “I’ve seen the transformation of a town that I grew up in and it happened without me. I left in 1974. Seeing what’s happened here, I can now proudly announce I am no longer LACMA intolerant,” he quipped.

Diane Kruger, who was seated with Turrell, chose an architectural ensemble by Monique Lhuillier in shades of blue of his famous skyscapes. But most celebrities donned Gucci, which prompted Michele to observe, “It makes everything real because when you have a real woman in a dress, it is the best moment.”