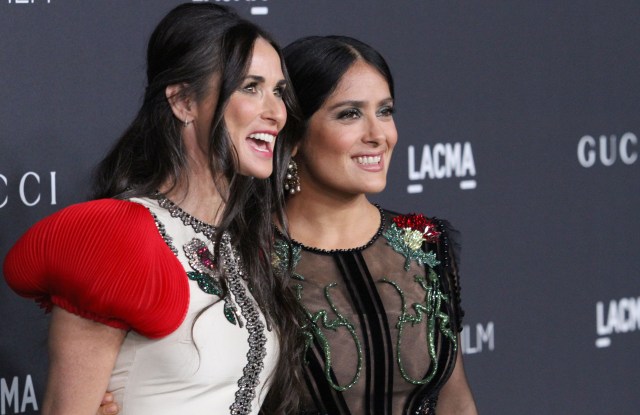 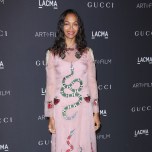 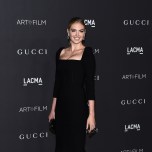 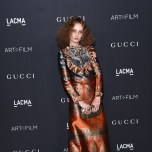 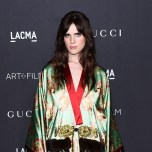 “It’s a good excuse to have a Hollywood weekend,” said Alessandro Michele, who served as gala host committee chair for the Los Angeles County Museum of Art’s sixth annual Art + Film gala on Saturday night. “Why not?”

“I think Los Angeles is such a fantastic place especially because of how many creative people there are here. LACMA is going to sit side-by-side with the Academy Museum of Motion Pictures and I think that helps define our place in a unique way, that was the whole idea,” said LACMA chief executive offier and Wallis Annenberg director Michael Govan.

“I don’t do too many of these,” said the 88-year-old Irwin, who shed his signature brown leather bomber for a black Gucci version. “I guess they like me better in this,” he said. As for his signature baseball hat, “I’ve worn this every single day of my life, so I’m not about to start taking it off now.” The light and space artist also stuck with a pair of blue jeans for the black-tie evening.

Not so for the rest of the crowd, much of whom donned colorful Gucci creations. “I didn’t feel like being low-key tonight,” said newcomer Makenzie Leigh of her harlequin-patterned sequined shirtdress. Neither did Salma Hayek, who came in a custom mesh and tulle gown with beaded serpents on the bodice. “I love this event because you get to talk to a lot of interesting people from different areas. I always walk out of here inspired. This is where we feed from, the talent of others. An artist who doesn’t say that about another artist is either a liar or not a real artist.”

Added her husband, Kering chief François-Henri Pinault, “I love this idea of the movie industry meeting the art world with the sponsorship of a great fashion brand.”

Actress-artist couple Zoe Saldana and Marco Perego were the glamorous epitome of this intersection, though the new mother admitted it takes work. “It’s become really hard for us to leave the house because we’re still in that mode of worrying about our twins, like, ‘Who has a fever?’ What do we do?'” Saldana said.

Among Michele’s creative touches for the event were a light green carpet outside in the museum’s plaza as well as inside the dinner pavilion, which was transformed into a garden, with flower-laden trellises climbing up the walls and ceiling. It made for a cozy atmosphere, where, at the “kids’ table,” Gia Coppola caught up with Brie Larson and her fiancé Alex Greenwald. “He used to babysit me,” said Coppola of musician Greenwald, a former bandmate of her cousin Robert Schwartzman.

Next to them, Jaden Smith, Hari Nef and A$AP Rocky chatted with singer Garrett Borns of the band Børns, who capped the evening off with a performance that included a cover of Elton John’s “Benny and the Jets.” “I get a lot of my musical inspiration from past eras, and so does Alessandro with his interpretations of color and print,” said the long-haired musician, who could have been the designer’s muse for how at home he looked in the colorful silk kimono-style jacket and pants he wore to dinner, accessorized with giant Gucci rings on every finger.

Borns changed into a slim-cut floral suit for his set, to which Smith and A$AP Rocky bobbed along enthusiastically. “Are you going to the after party?” Rocky asked one PYT. Dean and Dan Caten were definitely going, though Dean warned, “We are shooting our spring campaign with Mert and Marcus tomorrow (photographer Alas and Piggott were also present, taking portraits) so I told everyone, ‘No staying out too late.'”