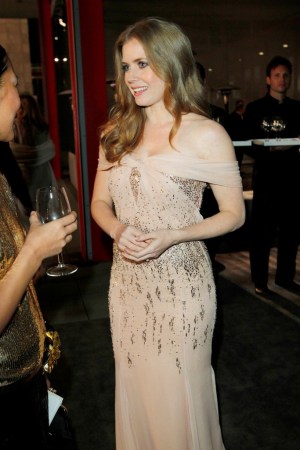 For Adams, it was a rare evening out with fiancé Darren Le Gallo.

It turned into a glam couples night as the pair hung with Blunt and husband Krasinski and Hudson and fiancé Matthew Bellamy throughout cocktails (tequila on the rocks for Blunt). As the scrim surrounding the museum’s plaza lifted, it revealed a temporary party pavilion that resembled a miniature Lincoln Center. The scene was enough to give Alber Elbaz, a friend of Chow’s, pause.

“This is wonderful. So elegant, so chic,” the designer said.

Inside the structure, long white tables arranged theater-style on descending levels surrounded a stage where the speeches were kept short and sweet, another first for Hollywood. “Thank you to Warner Brothers for springing the $300 these two tables must have cost,” said Eastwood wryly. “I know it wasn’t a cheap ticket.…Someone tonight asked me if I would sing a song from ‘Paint Your Wagon,’ but Stevie Wonder’s going to have to fill in for me.”

The singer was happy to take the stage, but admitted, “Clint, I don’t know the words to your song, but we’ll work something out.”

Instead, Wonder got the crowd dancing and singing along to “My Cherie Amour” and “Superstition.”