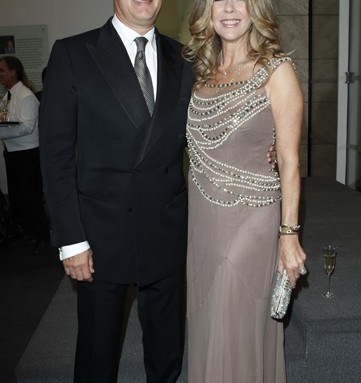 Between all the movie and television brass in attendance, there wasn’t that much room for actors. That didn’t stop reality ubiquitors Kim Kardashian and Nicole Richie from getting gussied up and showing up, and James Franco and Don Cheadle lent some thesp cred to the crowd. Up and coming Disney blockbuster talent Chris Hemsworth (“Thor”) and Olivia Wilde (“Tron”) were Iger’s guests, while John Baldessari, Ed Ruscha and Catherine Opie represented the artist contingent.

Guests mingled in the Renzo Piano-designed space for cocktails, then moved into an acre-wide tent designed as a trompe l’oeil Venetian piazza complete with frescoes projected onto the ceiling and columns on the walls (“It looks like Las Vegas,” marveled Wilde, which probably was not the intended reaction). Christina Aguilera serenaded the crowd with “Beautiful” and “Fighter” before they moved outside to the after-party for a Chapin Sisters performance. The separately-invited after-hours crew was more mini-skirted hipster than black-tie ballgown, including Katerina Graham, Gillian Zinser, Tracee Ellis Ross and Jenni Kayne, plus Giovanni Ribisi and PC Valmorbida.