The evening celebrated Dior's first female artistic director and the works of Agnes Martin, which served as inspiration for those still reeling from election night. 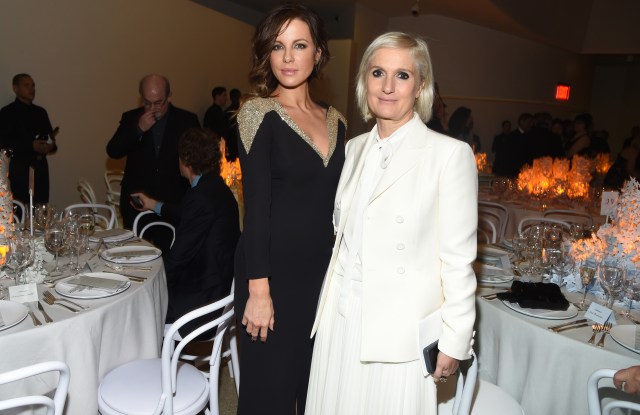 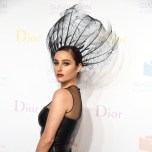 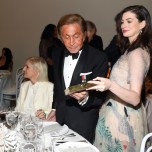 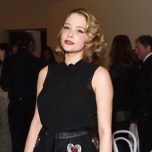 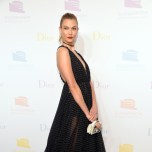 Double dose of Dior: it was back to the Guggenheim Thursday evening, for the more grown-up portion of the annual museum foundation benefit. On the heels of Wednesday’s late-night bash, the rotunda filled again for a seated dinner and a brief concert downstairs, for the likes of Anne Hathaway, Kate Beckinsale, Haley Bennett and Karlie Kloss.

Walking in, Dior’s new artistic director Maria Grazia Chiuri exchanged kisses with Mr. Valentino away from cameras, in a sweet personal moment, before making her way over to pose with Christian Dior chief executive Sidney Toledano.

“Every year the collaboration is more spectacular,” Toledano said before the performance, about the company’s Guggenheim partnership. “Yesterday we had the — how do you call it? — the party for the young, and I thought it was really a success. The people attending, the performer, Mrs. Banks — every time I discover a new one. And this year I like very much the artist, Agnes Martin. You know, I came here in the afternoon to look. Frankly, it’s very impressive.”

This year’s benefit honored six female artists: Tauba Auerbach, Tacita Dean, Leslie Hewitt, Sarah Morris, Laurie Simmons and Taryn Simon, as well as Martin, in memoriam, whose collection is the current exhibit around the museum. The symbolism proved poignant not only for attendees, several of whom reflected on the healing quality of Martin’s work against the election results, but for Mr. Toledano as well.

“You have Agnes Martin, the woman, with Maria Grazia, the woman, and many other women, the other artists. It’s a moment of energy,” he said. “Mr. Dior would love to be here tonight.”

Hathaway and her husband Adam Shulman were ushered into the performance late, just as Richard Tuttle was speaking of Martin’s work.

“I cannot say how pleased I am with this show. Agnes and this museum have been made for each other,” he told the audience. “A continuous ramp, a triumph of life and work. The Guggenheim of time and place would provide Agnes’ work pride and a place to change art, redefine and refresh each other.”

Upstairs, Giancarlo Giammetti sat and sipped as a flurry of flashes went off behind him for Hathaway and Banks, squished together in a photo opp. Beckinsale deflected to her publicist to eschew speaking with the press — game to don a Dior gown for the night, less game to talk about it.

Soaking it all in with splendor was Chiuri’s daughter, Rachele Regini, who’d spent the previous night posing for photos with Banks. “Oh my god I love her, she’s so nice. And she’s so talented, and very funny as well,” Regini said before dinner. “I think I’m sitting next to her so I’m very happy.”

Regini is a second year art history student in London, and therefore a particularly educated fan of Martin’s work. “I love it and I haven’t seen it yet,” she said of the exhibition. “I tried to see it last night but there were so many people.’

She was dressed in one of the fencing-inspired looks from Chiuri’s collection. “My mom was like you should try the white one on, and I was like, ‘Oh, you’re right!’” she said, rather adorably, of her choice of dress.

While many college students might not delight in tagging along with mom for a day at the office, Chiuri’s gig has some definite perks. “We were in Paris, right after the fashion show, and my mom knew this was going to happen here,” she said, “and she was like, ‘Do you want to go?’ and I was like, ‘Sure! Who doesn’t want to go to New York?’”