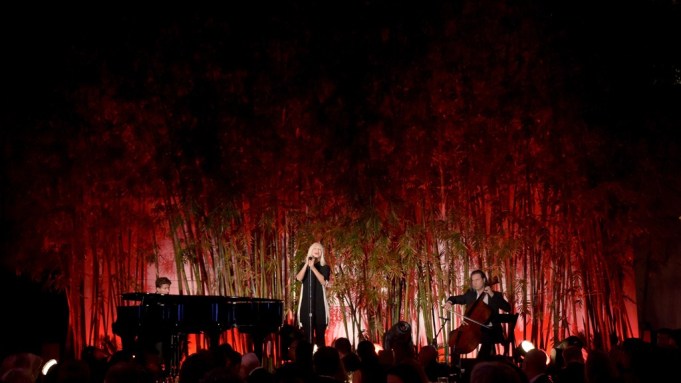 The Hammer Museum’s annual Gala in the Garden heralds the start of an intense run of fashion parties in Los Angeles — October being the month when design houses can finally take a minute to turn their efforts toward Hollywood after the collections. And while it’s an art party first and foremost — this year’s honorees were Joni Mitchell and Mark Bradford — the Hammer upped the fashion quotient by linking with Bottega Veneta last year (Gucci once sponsored the event but now puts its art party dollars toward Los Angeles County Museum of Art’s Art + Film gala here each November).

While Bottega’s creative director Tomas Maier bowed out this year at the last minute, even though he was a cochair, the fashion marketing machine had long before been put in place, assuring that a constellation of stars showed up in the house’s wares. From Julia Roberts, Demi Moore and January Jones to Dianna Agron, Zoe Saldana, Angela Lindvall and Kiernan Shipka, there was plenty of eye candy throughout the trilevel museum during cocktails and in the tree-filled courtyard where dinner took place.

Some, like Jones, admitted without a trace of self-consciousness that it was partly the fashion that drew them to an art event. “I’ve never even been to this museum. I’m obviously not very cultured. It was Bottega, Joni, and I love Emily and John,” she said, referring to honorary cochairs Emily Blunt and John Krasinski, who stayed home to attend to their new baby. “I don’t really go out too much but I will for good music.” Upon hearing that performer Sia wasn’t coming on until after 10 p.m., Jones told her sister, “We’ll have to call the sitter.”

Roberts, who chatted upstairs with friends Rita Wilson and Molly Shannon, called herself a “huge” Mitchell fan. “I have met her one other time and I was beside myself so I am hoping I can stay in myself tonight. My kids are now huge fans,” she said. “Music is so different now that to be able to take them back and say, ‘OK, but listen to this,’ and have them appreciate the musicianship and the craftsmanship, is major. My daughter, who is a sweet little singer, listens to Joni and you can really hear the singing because you don’t have a bunch of production trying to drown out her voice.”

Not surprisingly, “Almost Famous” director and former journalist Cameron Crowe gave the longest speech to introduce Mitchell. “As a journalist just starting out, the one interview I wanted most of all was Joni. We all did.” Later, it was Mitchell who gave him the “You complete me” line from “Jerry Maguire,” he said. In her song “Court and Spark” she writes, “I cleared myself/I sacrificed my blues/And you could complete me/I’d complete you.”

When Mitchell took the stage, she spoke not of her records but of her work as a painter. “I paint for myself and I paint kind of retro because I live in an old house, which I would like to have graced with Gauguins and Van Goghs, so not being able to afford them I paint somewhere in between,” she said. “It’s not going to set the art world on its ear. As far as I can see, the contemporary art world is like tics — it’s got to be psychotic, neurotic or erotic to get a toe in the door, and I’m back there with Matisse painting joyous things for tired businessmen.”

Sia closed out the night with a performance of her hit “Chandelier” and “Big Girls Cry,” a song that might as well have been written by Mitchell.