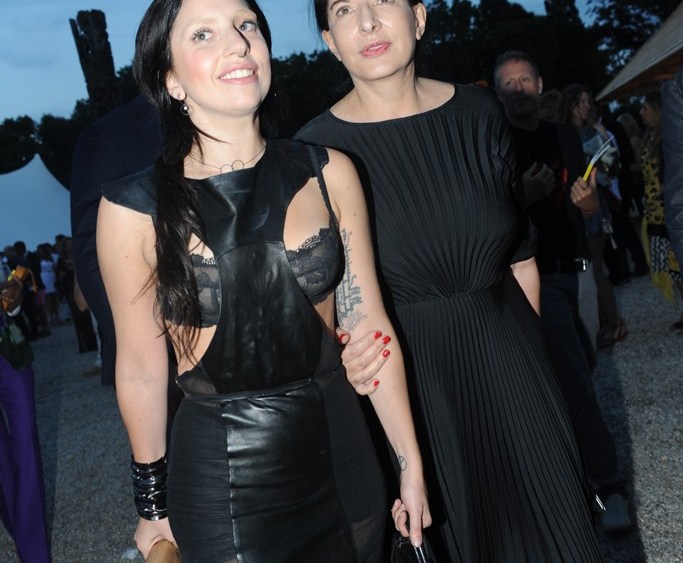 “I better not smoke until we get inside,” one partier bemoaned, glancing down at the very flammable-looking dry brush scattered over the walkway winding up the allée of the Watermill Center in New York on Saturday night. The passageway, lined with flickering tiki torches and florid shrubbery, was peopled with guests snailing their way into the center, which was hosting its 20th annual summer benefit.

Guests — Winona Ryder, Hugh Jackman, Cindy Sherman, Eddie Borgo, Alexis Dahan, Anh Duong, Cecilia Dean, Bob Colacello, Hannah Bronfman and Lisa Perry among them — trailed into the center, where the floor was composed solely of jagged stones. Handsome helpers proffered their hands to female partygoers to assist them in traversing the rocky terrain. “Thank god for that escort. That’s a pretty treacherous journey,” Casey Fremont sighed once she had made it to the other side.

“That was a very unwelcoming front,” Rick Owens, in town for the first time in six years by his estimation, said of the bouldered flooring. “Those poor ladies in heels — I don’t know how they do that.”

After the obstacle course, guests filtered into the center’s courtyard, also cloaked in rocks (albeit, of the much-easier-to-traverse, pebble sort), cocooned by enchanted forestry. Partygoers enjoyed a cocktail or two, then headed toward the surrounding woods, littered with a series of performance art pieces along a winding, moss-caked path. Stops along the way involved a phalanx of nude, painted, nymphlike tree huggers (quite literally); a drum-beating performer dissembled by an aluminum foil mask, and a troupe drawing oversize bubbles out of the front opening of their helmets. It was a very Daft Punk look.

“There are so many naked people,” perpetually soft-spoken Lindsey Wixson whispered.

Around 7:30 p.m., a cacophony of audible gasps and camera shutters caused virtually all guests to swing around toward the moving cyclone of paparazzi then traversing the courtyard.

An iPhone-readied rabble soon insulated the megastar. Bodyguards swatted away gawking onlookers while Gaga — a willowy apparition with bleached brows, a jet-black choppy do and hardly any makeup — said hello to Robert Wilson.

“She looks like she’s channeling Marina,” Misha Nonoo observed of Gaga’s sartorial look: a vampy black gown, a veritable palimpsest of leather, sheer netting and fleshy exposures and a delicate hoop embellishing her septum. “I quite like it.”

The trio toured the grounds. Gaga clutched onto the artist’s arm as the wood-chipped path was making the star’s heels a bit wobbly (they looked no less than seven inches high). They approached the first exhibition, “Funérailles de Miel” by Lisa Lozano, of a naked woman submerged in a coffin-size vat of honey. Gaga scooped a spoonful out and ate it. “Mmmm,” she purred, basking in the unfurling shock of the surrounding crowd.

As the trio took in the performance pieces throughout the backwoods of the sprawling property, the courtyard teemed with rumors of a possible dinnertime performance that, alas, never came through. Gaga did make her presence known at dinner in other ways. She dropped $80,000 on two pieces from the Simon de Pury-presided auction: $20,000 on a Dieter Meier giclée print and $60,000 on a wall installation by Abramovic, new bestie status seemingly secured.