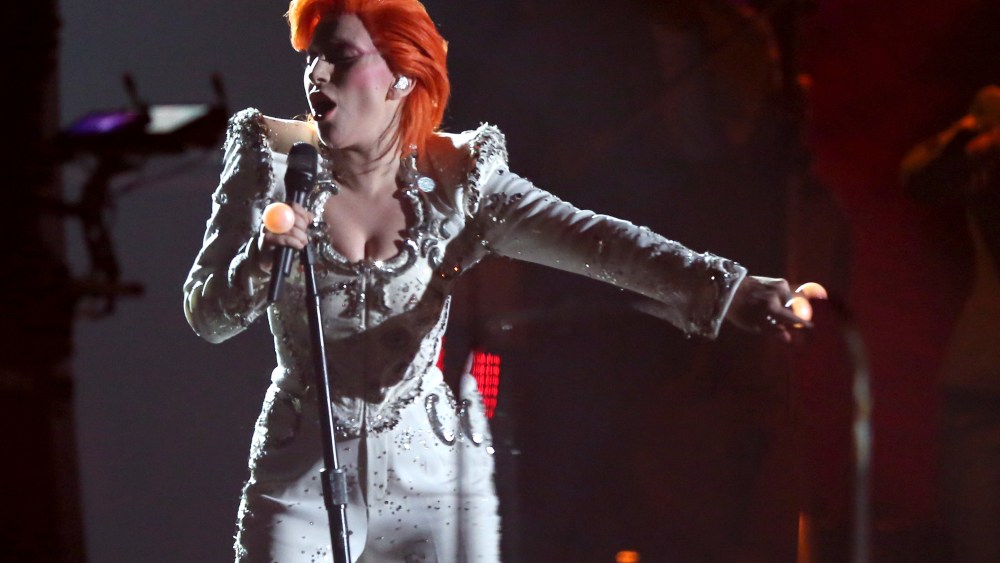 Many of the Grammy awards’ biggest stars barely had time to step and repeat on the red carpet before changing into their performance outfits, especially Taylor Swift, who opened the show with a performance of “Out of the Woods” (her emphatic final note promptly became a GIF) wearing a backless black beaded Jessica Jones catsuit with attached Stuart Weitzman boots and an illusion mesh inset down both sides. Her string of 1989 concerts has made her a pro at this sort of performance and hit the right notes style-wise, too.

Next, Carrie Underwood and Sam Hunt duet-ed their respective hits, Underwood in a diaphanous white knee-length dress by Maria Lucia Hohan that brought to mind an ice-dancing costume, while Hunt went back to basics in a white T-shirt and black jeans. The color coordination and their chemistry worked.

Adele woke things up in a sparkly red dress, as did Kendrick Lamar and his pyrotechnics.

Next, Justin Bieber kept the Saint Laurent going in a leopard-print varsity jacket to perform “Love Yourself” and “Where Are U Now,” for which he picked up a Grammy for Best Dance Recording.

Almost three hours into the show, Lady Gaga’s much-anticipated David Bowie tribute electrified some, but her white jumpsuit and pink boa were a fashion fail.

At least Sofia Vergara ended things on a sexy note (no shocker there) in a gold showgirl number for her cameo with Pitbull, but it’s a shame Rihanna had to cancel her performance due to bronchitis — she might have upped the ante on the onstage fashions.