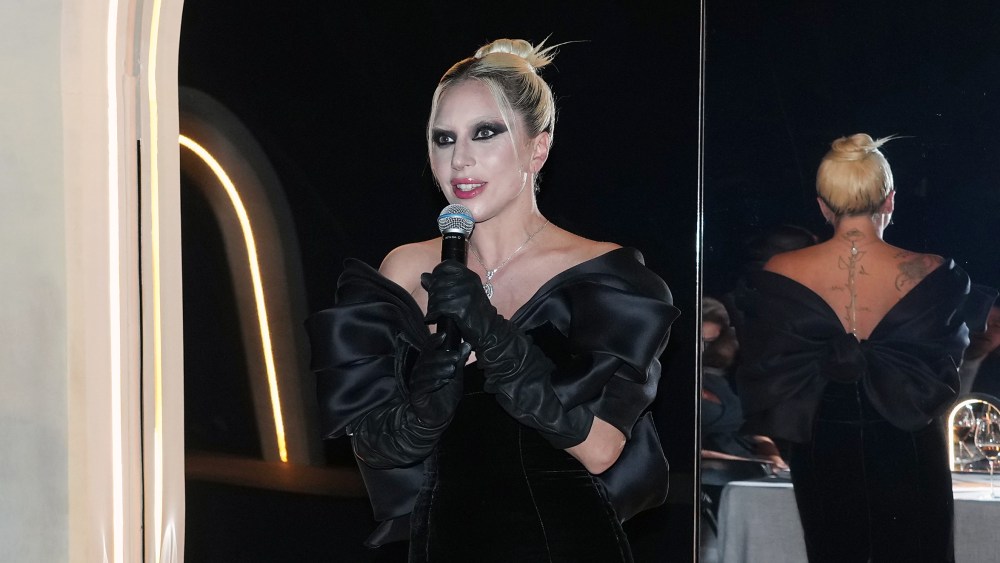 “Good to see all of you,” said Lady Gaga, addressing the dinner party, microphone in hand. “Thank you so much for being here.”

The crowd was sat in the open air atop the tennis courts at the Sheats–Goldstein Residence in the hills of Los Angeles — the architectural landmark designed by John Lautner. Owner and man-about-town James Goldstein, Billy Porter, Anderson .Paak and Alexandra Daddario were among guests around the seemingly endless table; arched mirrors on each end framed the illusion, with white neon lights illuminating the night.

The evening was hosted by Dom Pérignon, LVMH Moët Hennessy Louis Vuitton’s brand of vintage Champagne, toasting to Gaga’s partnership with the company on Thursday.

“I love working with Dom Pérignon and Vincent Chaperon,” the pop star and actress continued, of Dom Pérignon’s chef de cave. She wore a Gothic black ensemble, with gloves and platforms, by Topo Studio NY. “Hello my friend,” she said, turning to him.

“Tonight, we want to celebrate creativity, from the inside out,” Gaga said. “Tonight, we will focus on the introspective nature of being an artist, reflecting on not just our talent but our imagination, all the possibilities and the specialness of what it’s like to truly collaborate. When you collaborate, it reminds you that there’s an audience and maybe your friend is watching. I’d like to introduce you to someone that I love very much. I actually spent all day working with him in the studio. His name is Alex Smith. He’s one of the most brilliant jazz pianists I’ve ever heard in my life, my favorite being Thelonious Monk.”

She paused, telling Chaperon, “If jazz could be a Champagne, it would be Thelonious Monk, Vincent.” She went on, of Smith, “I hope you really listen to him tonight. My favorite thing about him is that while he plays, he sings. But you can’t hear him. He just sings to himself. He’s a great artist. Have a wonderful evening. I love you.”

On cue, Smith, a Grammy Award-winning pianist and composer, began playing the piano. He brought half the party to their feet, getting closer for a better look.

“Tonight is about creation and artistic dialogue,” Chaperon had said earlier, as dinner commenced prior to Gaga’s arrival. “Since now 2021, we’ve been working on correspondences with the talented and visionary Lady Gaga — I will be honored to welcome a little bit later tonight. Creation is work. It’s passionate, unrelenting work. It’s work that is never complete. It’s a work for me in relentless pursuit for harmony. And for Dom Pérignon, it’s a work that elevates ourselves.”

Gaga has designed limited-edition bottles for the house, in collaboration with Nicola Formichetti, coming to life in a fantastical short film campaign. A 2008 vintage rosé was served, paired by a menu imagined by chef Jordan Kahn of Vespertine.

“I thought that the rosé at Dom Pérignon was really the best wine to embody the vision of our founder, the Benedictine monk Dom Pierre Pérignon, considered the father of Champagne,” Chaperon said. “He was living with an ethos, ‘ora et labora,’ which means in Latin, ‘pray and work.’ So today, we are still inspired by his vision and we strive for harmony as a source of emotion. So tonight, I just want to share this emotion with all of you.”

The party would continue downstairs in Goldstein’s club space, overlooking the L.A. skyline. Formichetti was among those who showed up post-dinner, along with Alex Isreal, Rickey Thompson and Kerwin Frost, dancing to the thumping beats of DJ Hana Gabrielle Pestle — known as Hana. Gaga joined her behind the booth as they bopped to her songs and others, including Beyoncé’s “Pure/Honey.”

iPhones were raised to capture every moment.