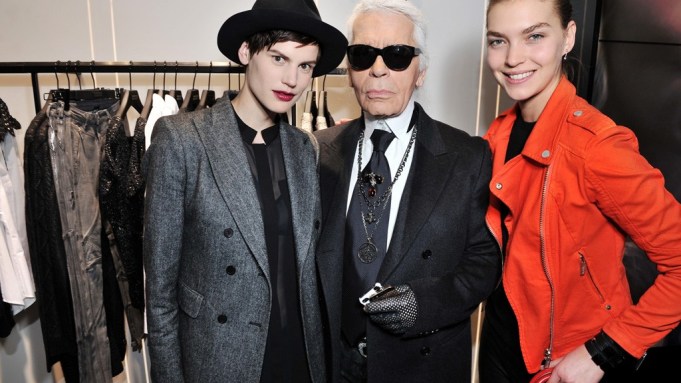 KARL KLUB: If the purpose of a boutique is to distil the essence of a designer, Karl Lagerfeld seems to have hit the nail on the head with his sleek and sumptuous new Paris flagship on Boulevard Saint-Germain, which opens to the public today.

“It’s so him; only black and white,” French actor Nicolas Duvauchelle declared as he surveyed the packed shop and reached for a glass of Champagne.

“It’s cool. They’ve got all his books here. Now I know where to go,” rapper Theophilus London added after carefully inspecting the selection of watches, just launched with American firm Fossil.

Marianne Faithfull, French singer Dani, Arizona Muse, Saskia de Brauw and a stream of editors and Left Bank personalities flooded into the rear of the shop and crowded around the designer, who conducted interviews for television in French, English and German, pausing now and then for a sip of diet cola out of a crystal glass he designed with Sweden’s Orrefors, also available in the shop.

Puffing on a cigarette out front, Faithfull recalled that she and Lagerfeld used to “rave around” New York when “I was in my thirties and Karl was in his forties.”

Faithfull is writing songs for a new album that comes out next year to coincide with a big anniversary: 50 years on the road as a performer and as a recording artist. “We’re doing a documentary, and there’s a huge picture book with Rizzoli,” she said, recounting some of the famous photographers who have immortalized her, David Bailey among them.

Clotilde Corau will soon hit the Paris stage for her one-woman play about Edith Piaf, called “L’Etre Intime,” and is now thinking seriously about what to wear to play the legendary singer, hinting at something not far from the Lagerfeld sweater coat she was sporting. “The costumes are going to be essential. It’ll be black for sure,” she said.