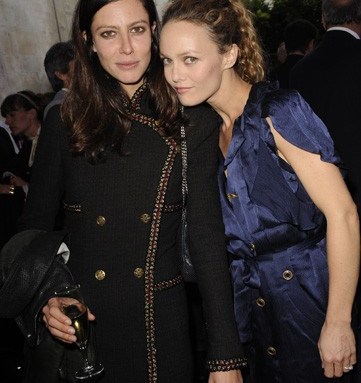 “It is extraordinary,” chirped designer-cum-decorator Vincent Darré, who literally danced through the exhibition rooms with Arielle Dombasle.

“I have worked with (Karl) so many times and his process is quite instinctive,” noted Vanessa Paradis, who recently appeared in a Chanel handbag campaign lensed by Lagerfeld. “I love photographs,” cooed the songstress and actress, who is heading back to the studio for some new music projects.

“Mesmerizing,” said Anna Mouglalis of the show, brimming with images of Paris and fashion icons. “I’m looking forward to the Chanel jewelry shoot with him this weekend.”

The actress, who just wrapped “Chez Gino,” directed by her partner Samuel Benchétrit, is hoping to head behind the camera. “I’m looking for finance and producers for two feature films I have written and would like to direct,” she said.

David Lynch, examining his portrait by Lagerfeld, had just jetted into town for a month to work on his lithographs. “I have over a hundred now,” said the director, whose films will be on show from Oct. 13 at the Cinémathèque Française in Paris.

In the museum’s courtyard, actress Delphine Chanéac said she’s heading to Los Angeles to film “For The Love of Money” with James Franco.

Rocker Bruno D’Alessandro of band Neimo said he was back in the studio and had collaborated with French singing legend Dani, who also attended the cocktail. “I was photographed by Karl for a number of record covers,” she said, adding that she would return to the stage and launch her new album, “Le Paris de Dani.”