The singer toasted her new ad campaign with a short concert on Wednesday. 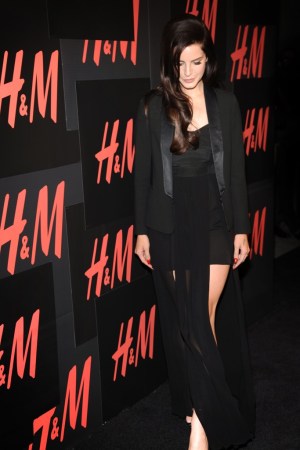 Along her whirlwind ride to pop stardom over the last 18 months or so, Lana Del Rey has forged a strong, symbiotic bond with the fashion community. There is her namesake handbag from Mulberry, a contract with Next Model Management and, as of this week, the fall advertising campaign she is fronting for H&M. The relationship makes a sort of sense. The singer’s approach to songcraft, heavy on finely curated pop-historical reference in both lyric and presentation, could be fairly compared to a designer’s mood board. Surely more than a few ateliers were responsible for some of those early YouTube views. And she tends to wear clothes well.

So it came as no surprise that a brief concert Del Rey put on to launch the David Lynch-inspired H&M campaign drew a fashion-heavy crowd to The Wooly on Wednesday night. Prabal Gurung, Jason Wu and Timo Weiland were all in the house, as were a number of socialites and party circuit regulars such as Maggie Betts, Barbara Bush, Arden Wohl, Cory Kennedy and André Saraiva. “I see so many faces that I love, we’re so happy to be here,” Del Rey said in her coquettish pitch, introducing herself to cheers and outstretched camera phones around 9 p.m. (She eschewed interviews for the evening.) It was the sort of crowd that applauded more loudly when the singer removed her jacket to reveal a floor-length black evening dress than for the opening notes of her signature hit, “Video Games.” “I have to say, if we knew how happy you’d be, this wouldn’t be the last song….But it is,” she said with a perk before closing, 15 minutes later, with “Blue Velvet.” The song, natch, soundtracks the new commercials.

This story first appeared in the September 21, 2012 issue of WWD. Subscribe Today.
You're missing something!
SUBSCRIBE NOW