Vahina Giocante and Francis Kurkdjian were among those who flocked to an event in Paris. 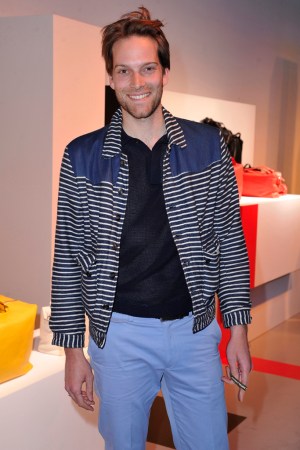 BON VOYAGE: “Bubble gum: That’s the scent that pops to my head when I look at the bags,” exclaimed Francis Kurkdjian.

Before going for sale online on May 7 — a first for Lancel — the collection was presented at Paris’ Palais de Tokyo on Thursday night with Mélanie Thierry, Noé Duchaufour-Lawrance and Dolores Doll among the guests.

“That’s what I do,” said Marianne Romestain, Lancel’s chief executive officer. “Everywhere I go, I have to launch an e-business,” said the former Comptoir des Cotonniers and Gerard Darel executive. “The start of the actual e-commerce is slated for September,” she revealed.

Romestain said she would favor a 48-hour weekender for her frequent trips to Shanghai. “I’m a good packer. One black dress, a black pair of pants, a few tops, and I’m done,” she said.

Vahina Giocante already sported a tourmaline 12-hour item strapped across her shoulder. “Yellow like the sun. That’s my color. I just came back from L.A.,” said the actress, who is shooting a TV series in Portugal. “I play Mata Hari. It’s a challenging role because she was so ahead of her time and charismatic. You need to be very confident.”

Fresh off the judges’ panel of The Voice, singer Jenifer was preparing for the show’s grand finale on Saturday. “We could use a genuine rocker like Côme,” she said of her rebellious protégé, who recently delivered a raucous interpretation of George Michael’s “Careless Whisper.”