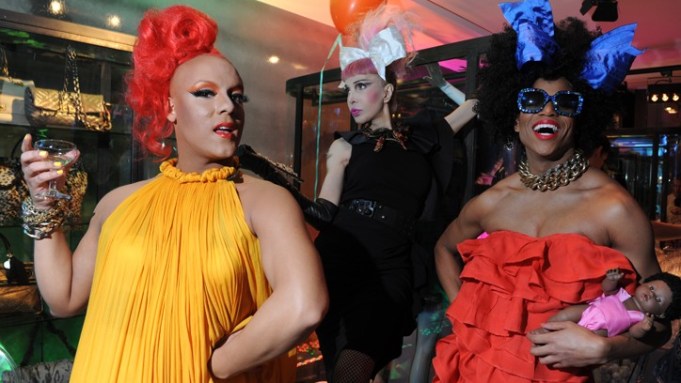 Everyone is familiar with the typical store party experience: wine and passed hors d’oeuvres in a cramped space before rushing off to the evening’s main event. Friday night Lanvin blew up all such expectations with its aptly named Halloween Extravaganza in its recently opened Madison Avenue boutique.

The shop’s facade was covered in a blush spectrum of 2,000 balloons, and inside there were 500 more balloons; a digital photo booth complete with Lanvin-designed backdrops; a selection of special masks for unadorned guests; waiters (sporting Lanvin ribbon bunches in lieu of ties) passing out confections like green apple cotton candy, mini donuts and limoncello popsicles; bars galore, and more confetti than a New Year’s Eve popper.

“I love Halloween. I love the fun, I love the happy part of it, it’s kind of unserious, which is not unlike me,” said Alber Elbaz, who was a self-described “pussycat” in a crystal encrusted mask with whiskers and a bow-tie. “[Last year] I was working in the studio doing pre-collection. [The last time I dressed up] I was 11. I think I was a piano.”

Elbaz certainly made up for lost time, dressing not only himself but a slew of Lanvin Dolls, drag stars who were scattered throughout the store wearing his designs and posing for the crowds. “It’s a sample,” boasted Koko Aviance of her strapless red dress (her Koko doll sported a special pink Lanvin playsuit) while Erickatoure Aviance declared of her mustard yellow floor-sweeper, “It’s the most comfortable full-length gown I’ve ever worn.”

Guests like Delfina Delettrez Fendi, Padma Lakshmi, Allison Sarofim, Samantha Mathis, Liu Wen and Constance Jablonski did their part, too: among the various creations gathered on the second floor, tricked out like a Studio 54 disco, were a cowboy, policemen, a mummy and man with a helicopter-esque light-up propeller on his head.

But none could top Janet Jackson, who showed up for 15 minutes with a mustache, wearing a long skirt and carrying a cigar.

“I’m J-baz,” she explained as she headed up to the makeshift VIP area on the third floor. “I’m Alber Elbaz in transition to becoming Janet Jackson.”

Anne Hathaway arrived with boyfriend Adam Shulman and had a particularly esoteric take on her leopard Lanvin jumpsuit and beaked mask ensemble.

She and Shulman had another set of costumes to make in time for their next party. “We’re gonna be the robots from Spike Jonze’s ‘I’m Here,’” she said.

Just after 11, guests were treated to a special performance by a trio of impersonators: Candi Stratton as Cher (singing “If I Could Turn Back Time”); Jason Cozmo as Dolly Parton (“Nine to Five”), and Princess Diandra as Tina Turner (“Proud Mary”). Hathaway was so taken she asked Parton to pose for photos with her on the dance floor.