The entrepreneur’s Italia Independent brand has partnered with the Swiss watchmaker on watches and sunglasses. 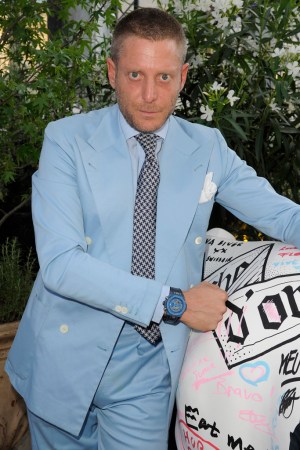 MOODY BLUE: The dress code on the invitation said “cocktail attire,” but savvy guests turned out in head-to-toe blue for the launch of Italia Independent’s collaboration with Swiss watchmaker Hublot held at — where else? — Monsieur Bleu on Wednesday night.

The Palais de Tokyo dining spot was awash in Italia Independent’s signature shade of blue, down to the red carpet, which was in fact a bolt of denim fabric.

“Blue, I believe, is the most powerful color in the world. It’s the sky, it’s the sea, it represents everything we dream of,” said the brand’s president and co-founder Lapo Elkann, wearing a light blue suit. “Blue is also the color of the national Italian football team,” he noted.

Elkann was sporting the denim-printed version of the Big Bang Unico Italia Independent watch, whipping it off to demonstrate its clip-on, clip-off interchangeable strap. The timepiece is also available in gray and each version will be produced in a limited edition of 500.

Made from a proprietary aluminum-coated carbon fiber called Texalium, the watches will go on sale in the United States in July and retail for $28,600. Each one comes with a pair of Italia Independent sunglasses as a bonus gift.

“For us, it’s a way of entering a new world, the world of lifestyle and design. It gives us a legitimacy to produce sunglasses as well,” said Ricardo Guadalupe, chief executive officer of Hublot.

Elkann noted he had a longstanding relationship with the watch brand through its prior collaborations with luxury sports car maker Ferrari and football club Juventus, both headed by members of his family.

The entrepreneur said that since it launched in March, his latest venture, Garage Italia Customs, has expanded from customizing cars and motorcycles to helicopters, private jets and boats.

“We have more work than we can actually do,” he reported. “The business of personalization and customization, only in automotive, is [worth] 40 billion euros, so there are huge margins for growth and we are just at the beginning.”

Andrea Tessitore, co-founder and ceo of Italia Independent Group, said the brand will open a second U.S. store in Miami next month, to be followed by a Los Angeles unit by year-end. “We believe the United States are a great opportunity for the future of our brand,” he said.

“We are very much into colors, materials, innovation, and we know perfectly well that the U.S. market is not necessarily going to react immediately in a positive way, so we need to work also to increase the brand awareness, to make our product known and eventually break through,” Tessitore explained.