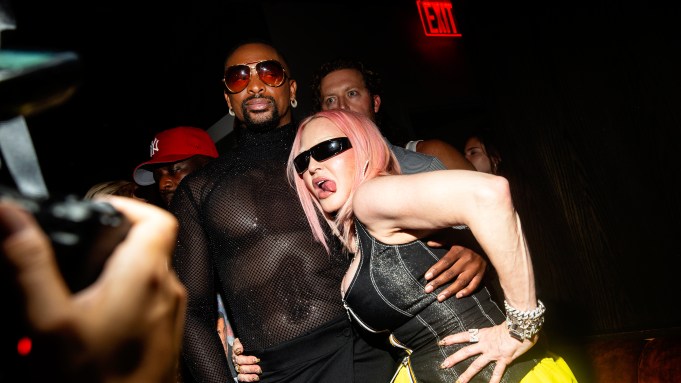 LaQuan Smith closed out the schedule of shows Monday of New York Fashion Week, but just because he had a 9 p.m. show didn’t mean he was ready to call it a night after the final bow. Around 11 p.m. Smith held an after party over at The Blond at 11 Howard Hotel, where VIP guests and admirers came to kiss the ring and celebrate Smith’s latest show.

Madonna, who has been making the rounds this fashion week, was in attendance, as was Diplo, Becky G, Cindy Bruna, Alton Mason, The Rocking Dolls, Winnie Harlow, Leomie Anderson, Tiwa Savage, Maggie Lindemann, PJ Tucker, Jordan Clarkson, Karrueche Tran, Kyle Kuzma, Burna Boy, Symone, Kendrick Sampson and more. Madonna seemed to be having the time of her life, posing tongue-out for photos and sitting down to a bowl of French fries part way through the evening.

The Rocking Dolls performed for the crowd earlier in the night, when the room was still navigable, before Diplo took over and people went wild, craning their phones to document the famous DJ at work. Madonna posted up on one side of the room with daughter Lourdes Leon, and stayed nearly the entire party.

The parties have been back in full force this fashion week, the first NYFW that has felt relatively normal since the pandemic. Givenchy and Marc Jacobs each hosted parties on Saturday night (Madonna again was in attendance at Jacobs’ party), while Friday night was the return of Bazaar Icons, this time celebrating the anniversary of Bloomingdale’s. Speaking of, just about every retailer has thrown a party this week: Nordstrom had a party at American Bar, Net-a-Porter hosted a cocktail at Le Dive, Saks threw its usual bash at L’Avenue, and Bergdorf Goodman hosted a party at Goodman’s.

One thing Smith’s party had that we’d yet to see this NYFW? LaQuan Smith branded joints.