Chloë Sevigny, Patricia Arquette, Dianna Agron, Isabel Lucas and Dita Von Teese were among the 850 or so guests on hand. 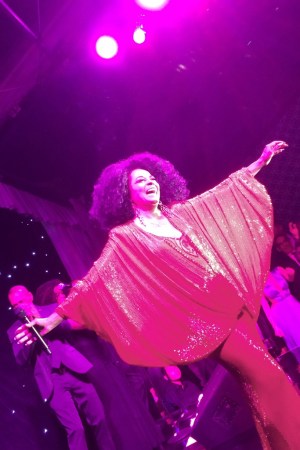 Katy Perry was at the annual gala for the Museum of Contemporary Art, Los Angeles Saturday night. She arrived to the cocktail hour by herself and went by unnoticed until a swarm of photographers spotted her. Though a world-famous pop star many times over, Perry is just now getting acquainted with the art world and the art world with her, and so it was that she came to an event that’s become a required pit stop for celebrities aspiring to become art connoisseurs. MOCA marked its 35th anniversary this year, but it wasn’t until 2007, when Louis Vuitton and its then-creative director Marc Jacobs staged a Takashi Murakami retrospective, that the gala began to attract real star power. Lady Gaga performed in 2009 before an audience that included Brad Pitt and Angelina Jolie.

This year, it was Perry who commanded the spotlight. In a rite of passage that will be familiar to many pop stars, she’s started to brush up on her modern art. Lately, she’s been enjoying a crash course courtesy of her friend, gallery owner Marc Selwyn.

“I’ve been on an art crawl for two weeks,” said Perry. “I went to see James Turrell, three galleries and some house tours.” The budding art lover seemed taken back by the valuation of the art on display at some of the private collections. “I saw a few Lichtensteins, met a few granddaughters. I could see trading your granddaughter for a Lichtenstein. I’d be down with that,” she said. Selwyn rescued the singer from the crush of photographers and she was off to confer with the other entertainers in the room, stopping first by an unlikely couple, Pharrell Williams and Jane Fonda.

Collector Aviv “Vivi” Nevo had several people doing double takes because he showed up in the same Vivienne Westwood hat as Pharrell, who paired his with a black linen Chanel jacket. “I want to get a photo with the hat,” Dasha Zhukova told Nevo, before gathering Larry Gagosian for a group shot.

Chloë Sevigny, Patricia Arquette, Dianna Agron, Isabel Lucas, Haley Bennett, Dita Von Teese, Diana Ross and daughter Tracee Ellis Ross, Rose McGowan and Joy Venturini Bianchi, as well as art world personalities like Doug Aitken, Ed Moses and Frank Gehry, were among the 850 or so guests on hand. They dined under a clear roof that reflected the long tables lit from within and etched with the interlocking circle motif of Louis Vuitton, the sponsor again this year.

Saturday’s gala was notable for two other reasons besides the anniversary — it was the opening of another important retrospective, for Mike Kelley, and it was the official welcome party for the museum’s new director, Philippe Vergne, who defected from New York’s Dia Art Foundation and will follow the controversial tenure of art dealer Jeffrey Deitch.

Vergne, who was chosen in part by several of the museum’s founding artists — John Baldessari, Ed Ruscha, Catherine Opie, Barbara Kruger and trustees Maurice Marciano, Lilly Tartikoff Karatz, Maria Bell, David Johnson, Fred Sands and others — called the Kelley exhibit “almost a road map of what a museum should be doing right now.” Though he has been on the job for less than a month, he already knows to lavish praise on the sponsor paying for supper.

“There is a lot in common between a museum and a fashion house,” Vergne said. “We both master a savoir faire and a tradition that we never compromise.”

After the four-course Wolfgang Puck portion of the evening, Ross delivered a surprise performance of her greatest hits. Her daughter was among those dancing front and center. “She’s pretty cute, my mom,” the younger Ross said. “She loves doing this. And she just turned 70 on Wednesday.”