The annual Midsummer Party was the final to be held in the museum's current brick home on Jobs Lane in Southampton. 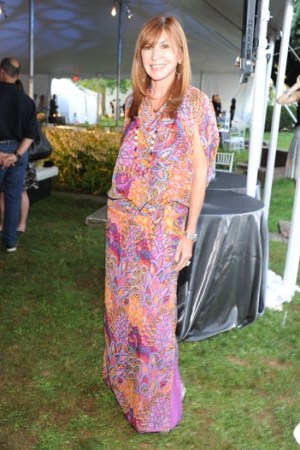 Over the past year, East Enders have watched the skeleton of the new Parrish Art Museum building gradually materialize on a patch of ground adjacent to the Montauk Highway in Water Mill. On Saturday, more than 500 of the museum’s supporters turned out for its annual Midsummer Party, the last to be held in it’s current brick home on Jobs Lane in Southampton.

“I don’t see this so much as goodbye as a new stage in life for the Parrish,” said Terrie Sultan, director of the museum. Designed by the Swiss firm Herzog & de Meuron, the new $25 million structure is slated to be completed by next summer and will nearly double the size of the current building to 34,500 square feet.

An exhibit of Malcolm Morley’s photorealistic paintings will christen the new building next year, the artist, who lives in neighboring Bellport, disclosed.

Sagaponack resident Ross Bleckner has been busy painting this summer, he said during cocktails before a seated dinner. The artist is also looking forward to the July 31 release of his book, “A3: Our Lives in the New York Times,” which reproduces two decades of his zealous clippings from the newspaper of record.

Former Barneys New York chief Gene Pressman, now a co-chief executive officer at Keoconnect.com, which operates marketing kiosks in airports, accompanied longtime friend and museum trustee Ira Drukier to the benefit. Drukier, co-founder of BD Hotels, which operates the Mercer, Bowery, Maritime, Greenwich and Jane hotels, among others, revealed that he’s inked a deal to open a boutique hotel on Ludlow Street on the Lower East Side.

Pressman, still a retailer at heart, half-jokingly pondered turning the Jobs Lane building into a shop once the Parrish vacates — but noted that the Southampton retail scene is sleepier than the one in East Hampton.