More than 300 retailers and apparel industry executives were treated to dinner in the museum's rotunda. 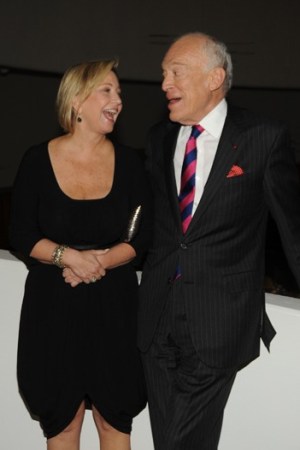 “If Leonard Lauder’s name is on the invitation, I’m going to come.”

Those words from Macy’s Inc. chairman, chief executive officer and president Terry Lundgren apparently rang true for more than 300 retailers and apparel industry executives who were treated to a dinner by Lauder and his company in the rotunda of Manhattan’s Guggenheim Museum Wednesday night. The beauty magnate hosted the event to welcome attendees of the World Department Store Summit, which is being held in New York City for the first time.

“These are our customers and our friends,” Lauder said. “We really don’t know where business stops and friendship begins. So when we learned that they were coming to New York, we thought we’d show them our city. I may not be Mr. New York, but I’m pretty close, and can you think of a better venue than the Guggenheim?”

Attendees were wowed by the venue and the hospitality of the Estée Lauder Cos. Inc., which Philippe Houze of Galeries Lafayette in Paris, said was the “common thread between us.”

Houze also embraced the opportunity to interact with other department store executives from around the world and learn about the different shopping patterns of their consumers. In emerging countries, he said, department store retailing is a new business, while in established nations, merchants must find a way to reinvent themselves. “And through meetings like these, we learn how to innovate.”

Maurizio Borletti, who oversees La Rinascente and Printemps, added: “It’s very interesting to hear how things are going around the world. In general, business is picking up. In Europe, France is doing better than most. Italy is harder, but it’s still growing.”

Also making an appearance to welcome the delegation to New York was Mayor Michael Bloomberg, who asked the attendees to spend money in the city: “We need the tax revenue,” he said. On a more serious note, he pointed out that 40 percent of New Yorkers were actually born outside of the U.S. but “live together as a mixture. In other cities, they live as a mosaic. In New York, you don’t see that.”