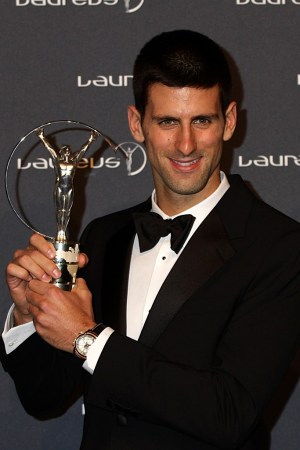 The event took place in London on Monday evening, with FC Barcelona winning the team of the year award, and Oscar Pistorius, who runs on carbon fiber blades, receiving the disability award. He was the first amputee to win a track medal in the non-disabled World Championships — a silver in the 4 x 400 meters relay.

Bryan Ferry performed during the event at Central Hall in Westminster, while Thandie Newton was the host for the evening.

Earlier on Monday, British Prime Minister David Cameron hosted a reception at Number 10 Downing Street for the sports men and women, where he announced the launch of the Sport is Great campaign, part of the British government’s drive to promote Britain abroad in the run up to the London 2012 Olympic and Paralympic Games.

Cameron said: “It is fantastic to have Laureus here as our partner, celebrating our sporting history, culture, and traditions, and recognizing the inspirational power of sport, as excitement builds towards the London 2012 Olympic Games.”

Laureus combines the Laureus World Sports Awards, the Sport for Good Foundation and the World Sports Academy to form an international organization that uses sport to inspire communities worldwide.

The Laureus Foundation undertakes research, builds expertise and promotes best practice in grassroots sports programs around the world. Proceeds from the annual awards — which are held in a different city each year — go to the Sport for Good Foundation, which supports 91 community sports projects around the world.

The main supporters of Laureus are the Richemont-owned watch brand IWC, Mercedes-Benz and Vodafone.