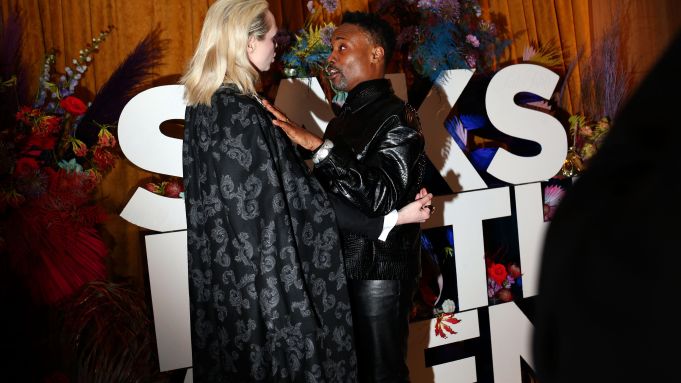 On Tuesday night, Billy Porter was getting his first taste of L’Avenue at Saks Fifth Avenue.

“I didn’t even know this s–t was up here,” exclaimed Porter, glancing out one of the restaurant’s windows, looking out on the Radio City neon sign one block away.

L’Avenue at Saks was celebrating its first anniversary and the party, which sprawled over its main dining room and downstairs to Le Chalet, was packed just five minutes after it started. Guests included designers Jason Wu, Fernando Garcia, Laura Kim and Wes Gordon, as well as Julia Fox, Victor Cruz, Natasha Lyonne, and Selah Louise Marley, who were greeted by a pyramid of Champagne flutes upon entrance.

Porter, the party’s cohost, was a quick L’Avenue convert and already had his return mapped out: “Take my husband out for a little shopping spree, and then come on and eat afterward,” he said.

It’ll be a well-deserved break, whenever he decides to take it. The actor is gearing up to film the third season of “Pose” and the new “Cinderella” movie, is working on developing TV projects, has a single dropping next month and is writing a memoir, titled “Unprotected.”

“It’s really emotional, because you have to relive everything: the good, the bad, the ugly, the amazing. It’s a rollercoaster of emotions, it’s clearing a path for me to deepen my healing,” he said of the writing process. “I’m in a new space as a result of it, and that makes me happy.”

While Porter has been a front row stalwart in past seasons, this year a different sort of fashion show is luring him away from the New York runways to L.A.: the Oscars. Known to don a dramatic gown for his awards season appearances, this weekend looks to be no different for Porter; although mum on specifics, he’s planning to wear a design by a London-based designer, first name Giles.

Could it be Giles Deacon, who also happens to be the boyfriend of Gwendoline Christie? The actress, dressed in Dior couture, stopped by the restaurant’s one year celebration party before flying back to London later that night.

“This is my first time at this particular restaurant, but the reason I’m excited about it is I believe it’s Carine Roitfeld’s favorite restaurant in Paris, and she remarked on how similar this one is. I think it’s a really delightful combination,” said Christie, who will be back in New York in May for the premiere of her next film “The Personal History of David Copperfield.” Before then, she’ll be working on some new projects, still in the early stages. “I wanted for a while to be more directly creatively involved in what I’m doing, and also to self generate parts for myself that are interesting and more representative of the world we live in now as women,” she said.

In addition to L’Avenue, Christie had also stopped by Marc Jacobs’ studio. “I was lucky enough to see Marc today, and I feel really appreciative of my relationship with him, because he’s always been one of my favorite designers,” she said. “As far as I’m concerned, he’s one of the greats.”

“Mulan” actor Yoson An, who’s from New Zealand and recently moved to L.A., was in New York for the first time and making the fashion week rounds. Earlier in the day, he’d taken in collections by Victor Lee and N. Hoolywood.

“I love [New York],” he said. “It’s so diverse, and I really feel like the architecture reflects who people are.” His remaining time in New York includes more shows and events, concluding with Todd Synder, before An heads back to L.A. to continue the “Mulan” press tour.

With a rumored budget of around $300 million, a record high for the studio, Disney is certainly hoping so.