Le Bain Rings in Bastille Day with Liberté, Egalité and Lots of Fraternité

André Saraiva co-hosted a Bastille day party with Saint James and Opening Ceremony at the nightclub on Thursday. 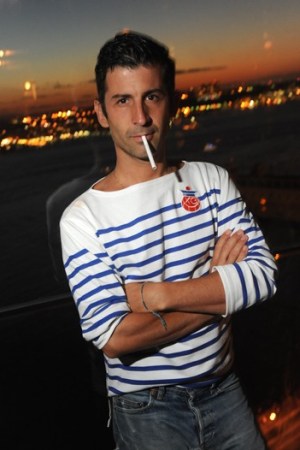 “Last Bastille day we were here for our big party, and now again, so now, c’est un tradition! Vive la revolution!” André Saraiva said with a grin as fireworks broke overhead at the Standard Hotel’s rooftop bar, Le Bain, on Thursday night. Saraiva was co-hosting a Bastille Day party with Saint James and Opening Ceremony to unveil their collaboration: his take on the Breton marinière. Saraiva’s version of the French wardrobe staple boasts his graffiti signature “Mr. A” embroidered over the heart as well as a blue sailor hat on one sleeve. The version Saraiva sported had a red, white and blue “Mr. A” made especially for him.

“Everyone loves them, I grew up wearing these. Picasso used to wear it, you can’t get better than that,” Saraiva said before turning to greet a late-arriving Genevieve Jones.

Maria Cornejo and her daughter Bibi were on hand, sipping St. Germain cocktails and taking in the sunset with Mark Borthwick, Jean-Philippe Delhomme and Gilles Bensimon. Downstairs, the hot tub heated up via two nude revelers simulating a public sex act for a meager, largely unimpressed audience.

“Oh, that hot tub has seen a lot,” Adrian Cowen offered before heading back upstairs. “Nudity is…whatever. Good for them. I’m more interested in the fireworks.”

They certainly were a big draw.

“Did you like our little fireworks show?” Natacha Polaert of Nouvelle Garde said with a wink as the extended finale of colored explosions lit up the Hudson. “We, all the Frenchies, pooled our money well to put that on. But that’s how we do it!”