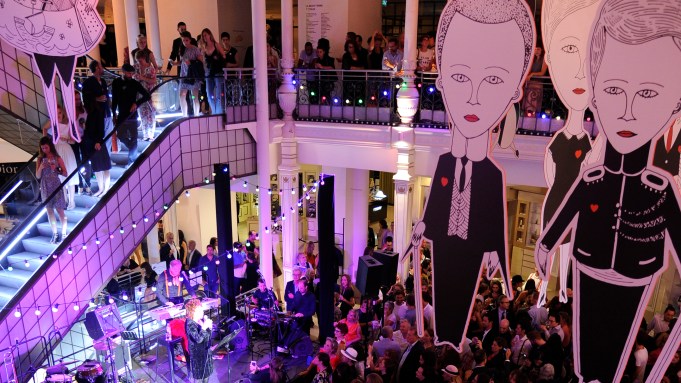 “She’s a legend, a monument. There’s something of Édith Piaf in Régine,” said Thomas Cerkevic, founder of RSVP, a leather-goods label that’s among the 150 new brands from various neighborhoods of Paris, including Château Rouge, Barbès and Montorgueil, in the storewide showcase devoted to the City of Light.

“We managed to find designers that you don’t find elsewhere. It’s an opportunity for us to introduce new brands,” said Le Bon Marché’s chairman and chief executive officer Patrice Wagner, noting that the Sacai label was first introduced to the store as part of its Japan-themed exhibition in 2014 and is now part of its full-time assortment.

Dancing took place under the whimsical characters sketched by street artist Fred Le Chevalier that float in the store’s atrium, which is part of the sprawling “Paris!” event, which runs through Oct. 15 and has Christian Louboutin as the guest of honor. Its layout involves faux Parisian newspaper kiosks and cobblestones, and spans men’s and women’s fashion, accessories, beauty products, kids’ wear and home and gift items. There are also specialty items at La Grande Épicerie de Paris gourmet food hall.

Zylberberg made her entrance on the store’s Andrée Puttman-designed escalators before getting on a stage to perform her hit songs including “Les petits papiers.”

“To see her like this, it’s actually surreal, but it goes with the [adage] ‘Parisian lights will never dim.’ Paris will always be Paris. She was the queen of the night and she’s still here,” said Gabriella Wright. The “True Blood” actress is to star with Antonio Banderas in “Security,” which is slated to come out in the beginning of the next year. “I am playing a very badass. We’re both security guards. We are protecting a little girl. I had to work out, kill a couple of people — only in the film. I am all about peace and love in my life,” she said with a laugh.

“I usually sing on big stages and I go to Le Bon Marché as a shopper,” said Zylberberg after her performance, adding that she could have bought everything in the store while making her way to the stage. “I almost tried on shoes on my way down.”

Louboutin and a crop of young French actresses, including Diane Rouxel, Alice Pol and Marilou Berry, also turned out.

“It’s my Paris [that was re-created]. There are elements of 25 years in it,” said Louboutin of his own installation, whose black-and-white floor mimics that of the Galerie Véro-Dodat, Paris’ covered passageway where he has a store. The pop-up features exclusive products and the designer’s new fragrance.

“I took a tour [of the exhibit]: There are many designers I didn’t know,” said Rouxel, who was nominated for the César award for most promising actress in 2016. “It’s important to give young designers a chance.” The actress, who was sporting a blue Agnès b. jumpsuit, had hopped over Paris for the event from the seaside town of Deauville, where she’s currently on the “revelations jury” duty of the American Film Festival there. Next, she plans to attend runway shows, including Agnès b., Chanel, Valentino and Chloé, during the upcoming fashion season in Paris.

Meanwhile, Pol is to star in “Cézanne et moi,” a period drama about the decadelong friendship between painter Paul Cézanne and novelist Émile Zola, played by Guillaume Canet. “I play Alexandrine Zola, Émile Zola’s wife,” she explained, also saying that master costume designer Catherine Leterrier tailor-made some of the clothing appearing in the film. “[She] had them made in England. They’re sublime, the fabrics….”

The Vuitton honcho praised the city’s vibrant, creative energy, saying: “There’s Paris, and there are the others.”

Singer Yael Naim is slated to perform at the Le Bataclan for the reopening of the concert hall a year after the massacre that was part of the November 2015 terror attacks in Paris. “It will be painful, but it’s important to get together there,” she said. Naim, who became an instant celebrity when her “New Soul” song was picked up by Apple in 2007 for a MacBook Air ad, is to tour for her latest album, “Older.” She is also to perform at New York’s Highline Ballroom on Dec. 7 and 8.