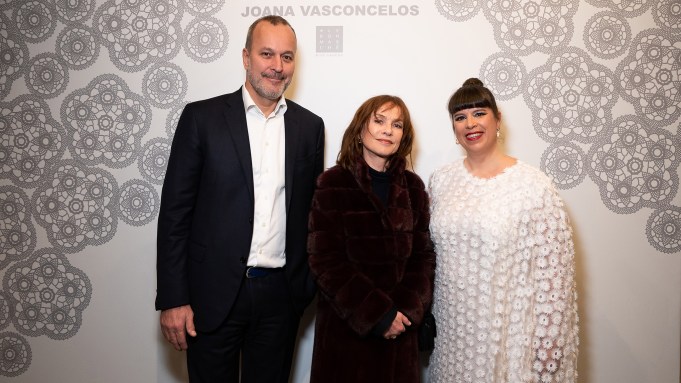 A NIGHT IN LISBON: Portuguese musician Paulo Bragança entertained guests at Le Bon Marché on Wednesday night, delivering a hypnotic fado performance, a music genre consisting of mournful songs to the sound of acoustic guitars that originated in Lisbon.

The musician, whose stage get-up prompted comparisons with both Ziggy Stardust-era David Bowie and The Cure frontman Robert Smith, is a friend of Joana Vasconcelos’, the Portuguese artist whose monumental installation is currently taking over the Parisian department store’s main staircase.

French actress Isabelle Huppert stopped by to greet Vasconcelos, posing for pictures alongside new talent Diane Rouxel, who is nominated for this year’s best actress award at the Césars, the French equivalent of the Oscars, for her role in “Marche Ou Crève.”

Don’t expect her to be starstruck, though. “I know Isabelle quite well, she was my chaperone when I was first nominated at the Césars three years ago,” said the 26-year-old-actress, who was joined by fellow thespian Ana Girardot in the foyer of Le Bon Marché.

Vasconcelos, who was wearing a white cape-like shift dress embroidered with rows of flowers, greeted artist and decorator India Mahdavi. “I think it’s fabulous that Le Bon Marché is honoring a woman artist tonight,” said Mahdavi, who famously designed pink Instagram-friendly restaurant Sketch in London. “What I like about her work is that it celebrates Portuguese craftsmanship, in her very personal and imaginative way.”

Guests snacked on typical Portuguese delicacies, such as cockles and a cod gratin, and sipped glasses of porto while taking in “Simone,” Vasconcelos’ tentacular white-and-silver creature, which lit up as the evening progressed.