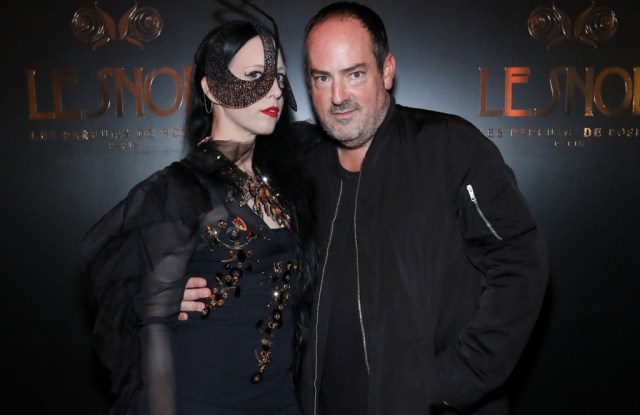 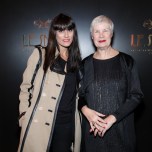 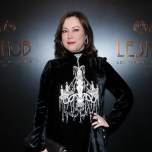 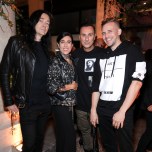 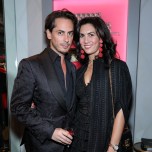 LE SNOB SCENT: Fashion, film and music folk converged en masse Friday night in Paris for the launch of the first fragrance conceived by Le Snob, the lifestyle brand started by B. Åkerlund and Robert Lussier that also presented its 2017 collection.

“The whole idea for Le Snob was created for the woman who has everything,” said Åkerlund, a stylist for the likes of Madonna, Katy Perry, Rihanna and Beyoncé. “I wanted to create a good gift. I have fancy friends, and I never know what to give them.”

Lussier, a creative director, said he’d been speaking to Åkerlund about roses, and how much he loved the perfume maker Les Parfums de Rosine (one of his signature scents is its Zephir de Rose).

“We were talking and said wouldn’t it be fun to do the snobbiest accessory – our own perfume,” explained Lussier, speaking outside the Rosine shop at Palais-Royal, which was decorated as a gothic garden by Eric Chauvin. So Lussier spoke to Rosine founder Marie-Hélène Rogeon, and she said yes right away.

“Robert was one of my favorite customers,” she said, adding the project – slated to be a trio of fragrances – is a mix of each brand’s story.

“My aim was to trigger surprise,” said perfumer Joëlle Lerioux Patris, of Fragrance Resources, who mixed the scent’s notes of rose with burnt rubber.

“Luxury is not being safe,” continued Lussier, who explained: “We’re calling this one a gothic night Snob.” It’s currently available in the Rosine stores and about 100 other doors.

Jennifer Tilly was among guests at the cocktail. “We’re about to start a new ‘Chucky’ movie. It’ll be my fourth,” she said. “We are filming up in Canada, which is great because I’m Canadian.” Tilly, who was sporting a Dolce & Gabbana sweater featuring a chandelier, continues playing poker on TV, as well.

Jonas Åkerlund – B.’s husband – had jetted in from Budapest, where he is shooting a film he wrote, called “Lords of Chaos.” “The movie is based on a true story in Norway in the Nineties, and is about young boys doing stupid things. I had grown up with some of the boys, so it’s a very personal story,” he said.

Otherwise, Åkerlund over the past year has worked on music and concert tour videos for the likes of Madonna, Beyoncé, Taylor Swift and Pussy Riot.

Kilian Hennessy is focusing on the 10th anniversary of his eponymous fragrance brand next year, which will involve an event and a new collection. The theme? “Art and sex,” he said with a laugh.

Luigi Murenu, who stopped hairstyling one year ago to focus fully on his photography work with Iango Henzi (together known as Luigi & Henzi), was also present. While in Paris they were taking in shows of clients such as Versace, Givenchy and Margiela. “We’re working a lot,” he said.

Jewelry designer Paige Novick had just completed a collaboration on single-statement earrings with Tibi for spring 2016. “This season, it was based on a melted 45-record,” she said.

In town showing her own line, Novick divulged she has more tie-ups in the works, though kept mum on names. “One is a fine-jewelry collaboration with a brand that hasn’t delved into fine jewelry yet,” she said. “Another one is potentially with an eveningwear brand, and I just completed a collaboration with a swimwear line that is about to launch. I’m in talks with some mass retailers, as well.”

Other guests at the soirée included Alexis Mabille, Marie Beltrami and Blanca Li.