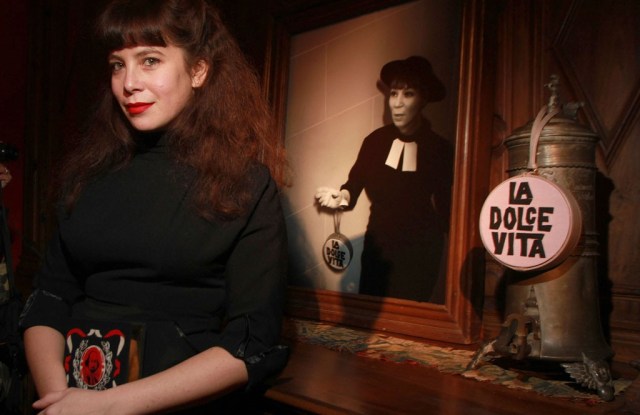 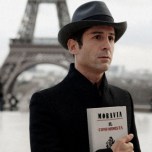 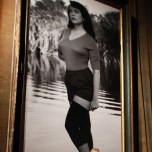 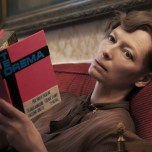 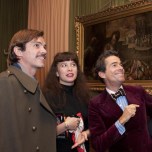 French accessories designer Olympia Le-Tan channeled the glamour of Italy in the Fifties and Sixties for her latest bag collection, a special project as guest designer of the Pitti W trade fair in Florence.

Le-Tan took over the dusty Museo Bellini for her presentation, draping red monogrammed curtains about the place and entwining clusters of ivy and pink roses around the museum’s marble staircase. Inside the antiques-filled rooms, groups of tall white candles gave a churchy feel. “I thought the place felt kind of Visconti-esque,” said Le-Tan.

It all felt dark and decadent, the main theme of the collection being Italian literary classics, with the covers of vintage editions of the likes of Dante Alighieri’s “The Divine Comedy” and Elsa Morante’s “La Storia” embroidered onto book-shaped minaudieres that came presented in glass cases. The playful Paris designer had even placed one of her new bags around the neck of a sculpture of the Virgin Mary, part of the museum’s private collection of Renaissance art and antiques belonging to the Bellini family.

A new line of round bags mimicking film-reel storage boxes paid homage to the movie adaptations of certain novels, with the work’s titles embroidered in the same font as the original opening credits.

Around the walls, retro-looking photos starred friends of the brand re-enacting scenes from each of the movies represented, including Le-Tan’s sister Cléo doing a convincing Claudia Cardinale in a scene from Luchino Visconti’s “The Leopard.” Tilda Swinton posed as Silvana Mangano in Pier Paolo Pasolini’s  “Teorema,” André Saraiva as Jean-Louis Trintignant in Bernardo Bertolucci’s “The Conformist,” and Le-Tan herself as Silvana Mangano in Giuseppe De Santis’ “Bitter Rice.” Victoire de Castellane and Purple’s Olivier Zahm also participated in the project, the latter posing in his birthday suit as “Salò di Pasolini.”

Le-Tan, who presented a few frocks at her last presentation, said she has added on a few more clothing elements for her fall collection that is to be presented in Paris in March.