Ladies’ Night Out in Cannes

Calvin Klein Collection and the Independent Filmmaker Project threw a party celebrating the women of Cannes. 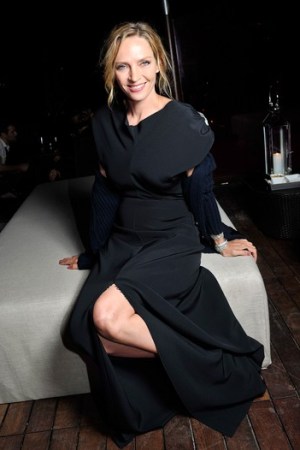 Guests gathered under the stars at the Vitaminwater Z Plage Beach at the Hotel Martinez to sip Champagne and swap stories. Australian novelist-turned-director Julia Leigh said she planned to party hard having just attended the premiere of her first directorial effort, “Sleeping Beauty,” which is in competition for the coveted Palme d’Or award. “It’s been a strange, intense and wonderful experience…We all worked for years to make this film so if I didn’t celebrate now, I would be a fool,” she said, marveling at the 2,600-capacity Grand Théâtre Lumière cinema where her film screened. “I just approach the experience as if I’m entering an incredibly foreign country and I don’t know what’s going to happen next,” she mused.

Director Jane Campion, accompanied by her daughter Alice, said she is busy writing “Top of the Lake,” a six-hour television mini-series. “It’s a mystery crime story set in New Zealand,” she said, adding that it was produced by See-Saw Films, the company behind the award-winning “The King’s Speech.”

Thurman, who is sitting on the festival jury this year, said she planned to stick to acting. “I don’t have a directing project in the pipeline. I always think I’m not visual enough, but maybe one day. I think about it, but then, between my dyslexia and my ADD, I forget about it,” she said, exploding into laughter.

Rosario Dawson, meanwhile, predicted that movies for the Internet will be the next big thing. Her next feature, “Girl Walks Into A Bar,” is billed as the first major motion picture shot expressly for the Web and was produced by YouTube. “Carla Gugino, Danny DeVito, Josh Hartnett, Robert Forster, we’re all in it, we all shot a day of the movie over 11 days and it cost under $100,000,” said Dawson, adding that YouTube was so happy with the result, they signed a couple of five-picture deals with people she knows. “People are streaming films anyway, and especially with the recession, people are choosing their Internet over their cable,” she noted. “I think we’re going to see a lot more of it.”

Milling in the crowd, Natalia Vodianova, who plays the lead in “Belle du Seigneur,” due for release in September, is keen to continue acting but said she’s not quite ready to move to the Hollywood Hills. “I will avoid it like the plague right now, as I have all my children settled in England,” she said.

Cozying up to her comedian husband David Walliams on the dancefloor, Lara Stone confessed she was having a wardrobe crisis. The top model, who has just been announced as the face for Naked Glamour, Calvin Klein Underwear’s new fall advertising campaign, said her main concern for the near future is working out what to wear to Kate Moss’s wedding this summer. “I’m having a panic about it, I mean what do you wear?” laughed Stone, a true romantic who confessed she had stayed up until 7 a.m. to watch the British royal wedding from Los Angeles. “I cried — she’s now a princess,” she cooed about Catherine Middleton.

At the event, IFP announced an ongoing partnership with Euphoria Calvin Klein to present the Spotlight on Women Filmmakers “Live the Dream” grant, which will be awarded this November at the IFP Gotham Independent Film Awards in New York to a female director from the IFP’s Independent Filmmaker Labs program.