"Let's be honest — this is a good street right now with Maxfield's, Palace and Acne. I think it’s become one of the top streets in L.A.," Elliott said at the first event at his new flagship. 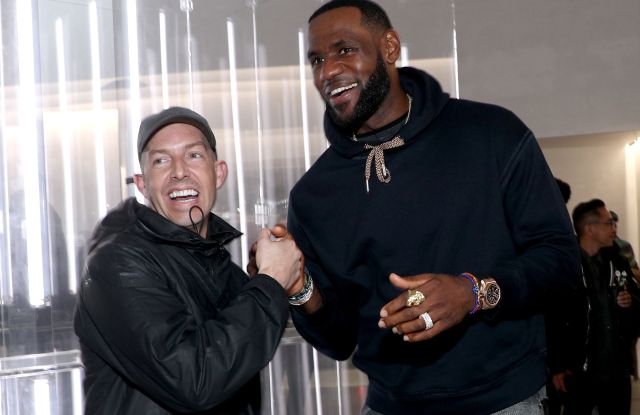 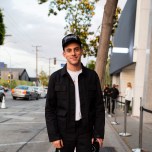 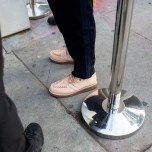 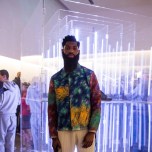 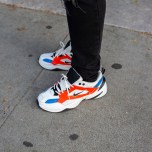 “LeBron is a force of nature, he’s like something we have never seen before,” John Elliott said of his Nike collaborator, NBA superstar LeBron James. “So my design partner (Japanese fabric distributor Nobu Yamamoto) and I started looking for other forces of nature and that led us to spillways and the way water cascades down these beautiful sheets of concrete. I felt it was very beautiful and it was a tie-in to our brand.”

Elements of Los Angeles’ urban scenery are frequently reflected in Elliott’s luxury streetwear so it’s no surprise that the city’s infrastructure inspired the Icon sneaker silhouette, with its signature translucent body that reveals a sock underneath, first released last year. On Tuesday night, Elliott and James celebrated the launch of its second colorway, the monochromatic “Triple Blacks” with a party at Elliott’s recently debuted flagship ahead of its global release on May 25. A crowd of athletes, models, tastemakers and entertainment industry elite mingled in the sleek 3,500 square foot space, where the “Triple Blacks” were featured prominently on glass shelves and within illuminated installations.

Despite coming off a rocky first season with the Los Angeles Lakers, it’s hard to imagine James looking more at home in L.A. than he did as he strolled into the party through a discreet back entrance shortly after 8 p.m. Flanked by his wife Savannah, dressed in a mostly white summery ensemble of a sheer top over a cropped tank, ripped jeans and strappy sandals, and accompanied by his manager Rich Paul and close friends Maverick Carter and Randy Mims, James seemed ebullient as he sipped on sparkling LaCroix, greeted guests and posed for pictures. Wearing a charcoal hoodie, gray pants and “Triple Blacks” with white laces, James later sauntered over to the DJ booth where he bumped fists with DJ Meel and delighted onlookers by dancing to Notorious B.I.G. and Isley Brothers beats.

Elliott described James as a very hands-on collaborator throughout the design process. “We have a colorway that is coming out in the not-so-distant future that is completely his call,” said Elliott, who has been one of the go-tos for the player’s off-court uniform for several years. “It’s something I’m so proud of that there is that open dialogue between the two of us and we can get on the phone or shoot over texts and trade ideas. He’s literally sending me inspiration. It shows how unique he is. He’s been so influential in my growth, not only as a designer but as a human.”

Midway through the night, James shared a warm embrace with his former Cleveland Cavaliers teammate, Tristan Thompson. “I think it’s amazing what John and LeBron have done with the collaboration, especially with basketball and sports right now,” said Thompson who donned a navy Rhude bomber jacket for the event. “All athletes want to be fashion-forward. We want to show that we are more than just athletes. And what John did with the ultimate goal of collaborating with Nike and LeBron and bringing those two worlds together.” Thompson went on to rave about the versatility of his personal favorite John Elliott staple, the Escobar sweatpants. “I can wear them during the day, to the nightclub, to dinner.”

One of Elliott’s first champions, Hollywood manager Scooter Braun, couldn’t speak highly enough of the collaboration. “LeBron is an icon for an entire generation and John Elliott is a genius,” Braun said. “The two of them have come together and they are tapping into that cultural zeitgeist. There’s a reason why people are going crazy to get these and there’s a reason why people love John’s fits and I’m just excited to be here witnessing it.”

Over the course of the night, a steady flow of guests streamed into the party which, like the brand itself, had a distinctly L.A. flavor. Local Italian favorite Jon & Vinny’s catered the celebration, serving some of the restaurant’s best-known pies, including the White Lightning and the L.A. Woman, directly out of pizza boxes. A bar set up against the back wall of the store in front of a row of bamboo trees provided the evening’s libations including specialty cocktails aptly named “Melrose” and “Robertson” after the store’s cross streets.

While waiting to pick up his pair of “Triple Blacks” at the event’s conclusion, Patrick Schwarzenegger recalled how Braun brought him on as an investor in the John Elliott brand. Schwarzenegger was quick to express his enthusiasm for the store’s new home on a stylish stretch of Melrose that now boasts numerous fashion outposts, including the recently-opened Palace streetwear mecca that has fans lining up down the block. “I’m excited that they opened this store on Melrose. It’s a big accomplishment. I live a block away so I walked here. It’s my neighborhood and there is a lot of fashion on this block. It’s really popping and I think it’s going to be great for him.”

Elliott echoed Schwarzenegger’s sentiments, adding that the local response has been overwhelming. “It’s been insane,” he said with a smile.  “I think there’s incredible energy around the brand right now, and having projects like this to activate brings a ton of energy to the brand and it brings a ton of energy to the street. But let’s be honest — this is a good street right now with Maxfield, Palace and Acne. I think it’s become one of the top streets in LA.”